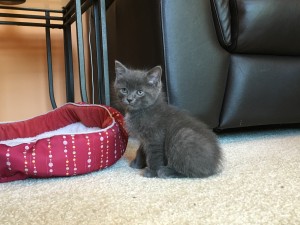 He’s the cutest kitten you ever saw, at least until he stands up. Then you see something’s not right. He doesn’t quite look like a kitten. Maybe like a gerbil. Or like his name, “Little Bear.”

About every six months, my better half, Kate, fosters a litter of kittens from the local animal shelter. It’s a win/win hobby for her. The kittens get food, a warm home, and climatized to humans. We get the pleasure (usually) of their company.

Sometimes the mom cat is with them, sometimes they’re orphans. This current batch came with the mother, but they were in bad shape. “Someone found them in a field,” the shelter workers told us. The mother cat was so starved, she looked like an old concentration camp photo. Two kittens died before they even left the shelter and a third died a week after we got them. That left three. Two had little stub tails. “Oh, they’re Manx kittens,” I mansplained to Kate. “I’ve heard of them. The breed comes from the Isle of Man between England and Ireland.”

The third kitten had no tail at all. I had no idea what you called that. But it turns out, there are different gradations of Manx cat. And contrary to what I had thought, it’s not a breed. Manx syndrome is a mutation: a defect in the gene which controls development of the spinal cord. 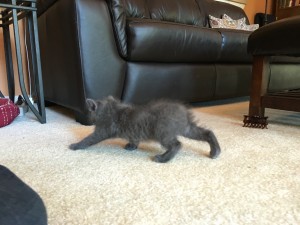 The past weeks have been an education on these creatures. The tailless variety is called a “rumpy.” Others are “pointers,” “stumpies,” and “stubbies,” depending on the length of tail. Over the years, people have tried to get them to breed true, breeding the short-tailed cats back to each other with results that are often deadly for kittens born of the breeding. The mutation can came with side effects ranging from picturesque, all the way to fatal.

Because the mutated gene controls spinal cord development, it can result in difficulty walking, poor control of bladder or bowel, or even forms of paralysis. In the most serious cases, the kitten just dies, or has to be euthanized. 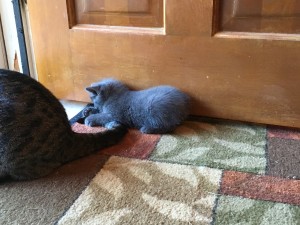 Little Bear is right on the borderline. We worried that he wouldn’t be able to walk, but he figured it out. He has a quirky limp. Instead of the standard kitten-gallop, he kind of hops with his back legs as he races after the the other two. He also has a problem with constipation due to decreased bowel function. He’ll require special food and perhaps medication as long as he lives.

That may not be long. When the kittens reach two pounds’ weight, they and the mother will go back to the animal shelter to be spayed/neutered and put up for adoption. Little Bear? Who knows? Strapped for funds and volunteers, this animal shelter, doesn’t have resources to deal with special needs kittens. Unless Little Bear gets lucky, his fate is likely to be the wrong end of a needle full of pentobarbitol.

Of course the sad part is, apart from difficulty pooping, Little Bear is as full of spit and vinegar–as eager to play–as any other kitten.

Which brings us to the ethical, “Gentle Atheist” piece of this. Reading up on Manx syndrome, the genetic mutation is classified as lethal. If it’s in both parents, the offspring will be too deformed to survive. Yet people still breed Manx cats because we like exotic pets. As the Universities Federation for Animal Welfare puts it, “breeding Manx cats results in persistence of these welfare issues.”

So–at this end of the spectrum, cat breeding instinct produced Little Bear, but people’s desire for exotic pets put him in the pickle he’s in. I don’t know quite what we do with that. He didn’t ask to be exotic. Being a cat, he doesn’t know he is exotic. He just wants to play, eat, sleep warm at night, and eat regularly same as any cat.)

There are bigger problems in the world than a kitten who faces execution if he doesn’t get adopted. But Little Bear’s is one problem we humans helped create.

Our Unitarian Universalist 7th Principle asks us to “respect the interdependent web of all existence, of which we are all a part.” Where’s Little Bear in that picture, I wonder?