Nebraska's Hudson Meng Bison Kill site can tell us a lot about life, death, and eternity. 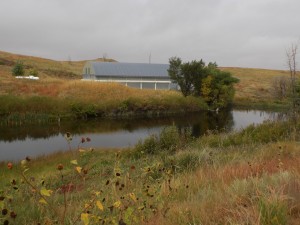 On a side trip last year while camping my way to the west coast, I found myself casting up dust along a tooth-jarring washboard road across Nebraska’s badlands. After twenty miles I arrived at a gravel parking lot, from which a dirt path led down to a Monet-like pond. Glassy water mirrored sky, cattails, willow, balm-of Gilead.

I walked across an earth fill dam. Before me was my destination, a long building shaped like a quonset hut.

The pond, I learned, had its origins in a spring thousands of years old, which once formed a marsh. In the 1950’s two ranchers named Albert Meng and Bill Hudson decided to turn the marsh into a stock pond. As they cleared brush and bulldozed dirt, they discovered bones weathering out of the hillside.

People thought they were just big sheep bones. Damn big sheep bones, though. Finally, the two men took some to a nearby state college where an archaeologist identified them as bison bones. Not just any old bison, either, but an extinct species called Bison antiquus.

Long story short, Bison antiquus was ancestor to the bison we know today. In other words, I can’t resist mentioning, Bison antiquus is one more of those “transitional” fossils creationists like to tell us don’t exist.

A bunch existed around that prehistoric marsh, though. Hundreds. Following Mr’s Hudson and Meng to their excavation, archaeologists uncovered a huge tangle of interlocked skeletons. It was a major discovery and is now called the Hudson Meng Bison Kill site.

Archaeologists are basically just garbage pickers. Except that they pick very old garbage and use the methods of crime scene investigators. They analyze the leavings of bygone cultures to learn how the people lived. Carbon dating clocked the Hudson Meng bones at about 9,800 years old. Mixed in with them were human artifacts: flint spear points, dart points, and stone knives. Researchers also found broken and cracked bones and bones scarred from butchering.

They therefore interpreted the site as a prehistoric slaughter. “Paleoindian”s in anthropologist jargon, drove a bison herd over a cliff, finished them off with stone-age weapons, and butchered them. It was estimated that about 80 Paleoindians processed up to eleven tons of dried meat, enough to last them all winter. For the record, early European explorers saw Great Plains Natives still using that technique thousands of years later. It’s called a buffalo jump.

After careful cataloguing and analysis, the researchers covered the bones back over with earth to protect them. Fifteen years later different archeologists re-opened the site and came to a very different conclusion. They said the bones showed evidence of natural decay and chewing by scavengers. What’s more, they concluded, the human artifacts were not all the same age. The flint spear points were an early technology, while the dart tips weren’t in use till much later. (For comparison, the bow and arrow came into use much later yet, a mere 1,500 years ago in North America.)

They decided the artifacts must have accumulated at the site through decades of on-and-off occupation. What’s more, these researchers didn’t see evidence of any prehistoric cliff to fall over in the first place. There never was any buffalo jump.

Therefore, they said, the first theory was wrong. The bison must have perished in some natural event, perhaps a range fire. The ancient marsh would have been a watering place for animals and humans alike. The artifacts were left by Paleoindians who camped there year after year, long after the bison died. Each group would leave castoff tools and trash which eventually filtered into the soil and got mixed in with the bones. Just by accident.

Long story short, it breaks down into three possibilities. The Paleoindians might have killed and butchered the bison. Or they might have come onto the dying or dead animals, finished them off, and ate them. Or maybe they just happened to be in the neighborhood afterward and got accused of the slaughter thousands of years later.

Scientists get into this kind of argument all the time. It’s where a lot of the fun of science is. It will take more detective work to solve the mystery, assuming it ever gets solved. Meanwhile, wandering through the site, framed displays invited me to come up with my own theory on how the Paleoindians lived and how the bison died.

A warehouse-sized building had been built over the site, so archeologists could leave the trenches open. I could enjoy the shade while I observed the revealed the bones for myself. Hundreds of them filled the bottom of the largest excavation, jumbled together in a charnel testament to this bygone bison herd. It brought back images of other mass, prehistoric burials: Rancho La Brea, Dinosaur National Park, on and on. We may be born as individuals. But in death we are a species.

Most fascinating to me were the display cases of artifacts collected at the sites. I looked at spear points, smaller tips from spear-thrower darts, stone scrapers, long flint knives. Flint arrowheads had also been added for comparison.

I’ve handled flint arrowheads and knives. There elegant tools, well balanced and efficient. The pressure flaking technique produces a hard, sharp edge you don’t want to mess with. In other words, they were crafted by people who plainly knew what they were doing. If I could operate a laptop as well as they operated a couple pieces of stone, I would be a happy man.

Bone heaps are grisly in a way. But studying them, one becomes used to the mass evidence of death. I’ve heard scientists talk about it: if you want to understand what really went on 10,000 years ago, a find like this is not the least bit grisly. It’s a rare and exciting window into a bygone world.

I have to reflect, the world holds no more death than life. It only seems that way. You can’t have one without the other. In the broad scope of things, a cemetery or a site like the Hudson Meng Bison Kill is a legacy, a celebration. Let us not deny death, but rather memorialize lives that were lived. Life, death, joy, tragedy, they all occupy the same space.

I reflect that death’s greatest service to we the living, might just be to make us pay attention. It’s an inescapable demonstration that something bigger than us is going on.

“It is a good day to die,” Crazy Horse was fond of saying before a battle. It’s a paradox I have to admit I struggle to get my head around. I’m fine pondering the distant stars, but reluctant to engage dead sparrows. I’d much rather work, play, watch a movie, mow a lawn–and mostly pretend my road will go on, nicely paved forever. Emotionally, I’m not as eager to think about what’s happened throughout history to all those other temporary schmucks. And that I’m going to share the same fate.

But then I see a mass of bones like this. And woops–dang–death is still here. I, too, am temporary. Is it really a good day to die? Maybe, but I don’t know. Sometime next week–or next year–or next decade, would be better.

But those ancient pieces of flint, the subtle crafting of them and the marks they made in bison bones so long ago. They, too, are real. People journeyed this way long ago. They lived and loved, same as me. They killed and carved and cooked and ate, same as me. Same as someone else will do generations hence.

They invented, hunted, crafted their subtle marvels of stone. They fashioned lives out of materials with which I have no skill at all. They knew what they were doing and I bet they talked and laughed while they did it. I would love to hear what a Paleoindian joke sounded like. And you can’t have the barbecue without the bones.

So bring ’em on, those bones.