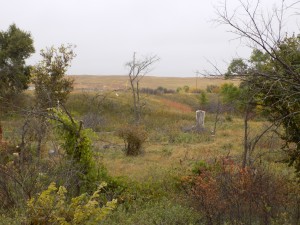 This December 29th will mark the 125th anniversary of the Wounded Knee Massacre. As students of American history probably already know, this 1890 horror was, in a real way, the end of the so-called “Indian Wars.” That is, it marked the final crushing blow specifically against the Lakota on the Great Plains, but symbolically against Native Americans across the rest of the continent.

Before Wounded Knee, suppression of indigenous peoples was about fighting or getting ready to fight. Afterward, it moved to squeezing out the culture itself: the very idea of Native life. In a real and pervasive way, Native life was driven from real-world existence, to become a harmless image the dominant culture (that is, people who look more-or-less like me) could manipulate as we chose. So that by 1900, Euro American images of self or land or society or who God was or who God really loved–could no longer be challenged in any real forum.

I won’t go into the long, sad details of how Wounded Knee came about. Suffice to say it was an atrocity born of cascading suspicion, misperception, misunderstanding, and finally–mass execution. U.S. Soldiers detained 350 Lakota villagers in the dead of winter. The Army has such fear and paranoia about the villagers’ intentions and even capacities–as to be just, plain ludicrous. It would make you laugh to keep from crying–except that it doesn’t. The paranoid folks had 400 rifles, along with horse-drawn artillery. No, it doesn’t make you laugh.

For the Lakota people, the massacre marks a crystallized moment between the genocide that came before and the cultural extermination that followed. For me–descendent of settlers that I am–Wounded Knee was a place to humbly reflect, pay respects, and grieve the human condition.

In the last week of September, 2015, taking a reflective journey across the continent, I stopped at historic Fort Robinson, site of the Red Cloud Agency. It would have been unconscionable to be in the area and not pay my respects at Wounded Knee. That meant a drive to today’s Pine Ridge Reservation, just across the state line in South Dakota.

The plains lay quiet beneath the late September sun as I navigated my way there. It took a bit of exploring to find the site. It was well into the off-season. To my surprise, no one was around as I stopped and got out of my car. 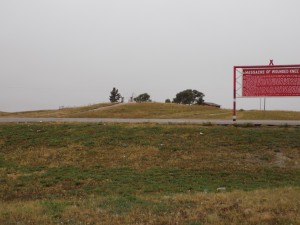 It’s often a strange feeling to actually visit a place you’ve read about. To the north, I could gaze up at the low, round hill where the Army stationed their Hotchkiss guns. (See photo.) There’s a monument up there now. It marks the mass grave where many of the 300 victims lie buried.

Closer, down on the flat right in front of me, was where the Lakota had put up their tipis. The lodges formed a long crescent running north to south. The Hotchkiss guns were positioned and sighted to rake the length of that camp.

In 1890, Hotchkiss “mountain guns” were the latest technology, imported from France. Each one fired 15 canisters a minute, each canister filled with lead pellets the size of ball bearings. “Grapeshot,” it was called. Do the math. Four Hotchkiss guns: an explosion every second, lead balls blasting through a camp filled mostly with women and children. At the same time, 400 other soldiers surrounded the camp, firing into it as rapidly as they could, like a shooting drill.

In addition to the 300 Lakota killed that day, 25 soldiers also lost their lives. Later analysts surmise that most of those deaths came from “friendly fire.” That is, soldiers hitting their own comrades in their hysterical crossfire. This wasn’t a military action, even though it was done by the U.S. Army. I don’t know what to call it, you tell me.

I looked for awhile, then turned away and paced along the shallow gully that leads down to Wounded Knee Creek itself. (First photo.) On that terrible day, terrified men, women, and children ran, fell, crawled in chaos through brush and snow, seeking shelter from the withering fire. I looked down into the little draw and reflected. It wasn’t really even a gully, just a depression in the flat plain. Not much shelter to be had there. A few trees, a bit of brush. I can picture the wood splintering in the hail of bullets.

It all happened a few days after Christmas. It was not a good day to die, Crazy Horse’s maxim notwithstanding. The weather was so cold the dead and even the merely wounded froze solid before they could be moved. The ground froze so hard the dead lay in the snow for days before the dirt thawed enough for them to be buried.

I sat for a long time. Words are inadequate. My eyes swept the broad land, then returned to the gully where all those people huddled. Women screamed, children screamed in terror, soldiers shouted. Guns, explosions crashing together, insane thunder echoing over the generations. When the firing finally stops, I image in my mind, there’s crying and whimpering from the wounded and terrified. That doesn’t last long in the bitter cold. A final few rifle shots echo as soldiers pursue the few survivors who were able to run away through the snow. Later, I subsequently learned, the U.S. government would issue 20 (count ’em) Congressional Medals of Honor to soldiers who took part in this fiasco. What were we trying to tell ourselves, I wonder?

It’s peaceful, now. I try to hold the thought in my mind, a cemetery is not just a remembrance, but a celebration. This was a celebration cut unconscionably short, this atrocity. The atrocity–the violent, vicious heedlessness–must be marked. We need this memorial. You’d never know anything happened in this place if not for the markers.

Atheist though I am, that’s still an image I find evocative. Kipling strongly believed in empire. He was the one who coined the phrase, “white man’s burden.” U.S. Army Commander Philip Sheridan, who coined the phrase, “The only good Indian is a dead Indian,” would have liked Kipling. Their Lord of Hosts plainly didn’t give a shit about non-white children.

Here’s what chills me the most: suppose I could go back in time and ask General Sheridan–or Colonel Forsyth, on-site commander of the soldiers at Wounded Knee, “Why did you do this heedless, terrible thing?” What chills me is–they might just reply: “Are you kidding? We did it for you.”

That’s where the gig goes in. For me. For my great grandfather, Tom McCarty, who homesteaded in Nebraska and already, by that time, had given up and trekked with his wife and surviving children back to eastern Iowa. But back in Iowa they were still farming land from which the Santee and the Fox and the Chippewa had already been driven. It was done for me. I eat corn, wheat, and soybeans grown on land where indigenous men hunted buffalo and women dried the meat, scraped the hides, stitched the tipis, sewed the moccasins. I am fed by the economy that grows on ground fertilized by their blood. What a convoluted legacy.

“Lord of Hosts, be with us yet. Lest we forget.” Whatever we believe in terms of religion, we–all of us–follow careless gods. In the face of human nature, the best ethics we can manage are as reliably unreliable as the wind.