The Native American water supply has been under assault for generations. Standing Rock is just the latest episode. Here's an older one. 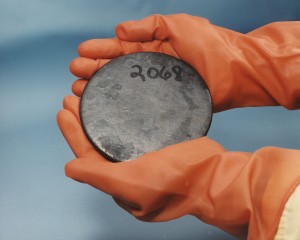 After I visited Wounded Knee in late 2015. It took hours to navigate Pine Ridge Reservation’s roads back to the Interstate. At one point I came to a “T” intersection. I pulled to a stop, facing a weathered strip of plywood nailed between two fence posts. Hand painted letters cried out, “NRC URANIUM EXPANSION HEARING. . . . STOP THE GENOCIDE & ECOCIDE NOW! #SHUT DOWN CROW BUTTE.” Smaller print announced the details on a public hearing.

I had seen Crow Butte while driving through Nebraska, a high, knobby prominence, named for an ancient battle between Crow and Lakota warriors. Now it’s leased by a company called Crow Butte Nuclear Resources. It turns out, this history-rich landmark sits over a 21st-century resource: uranium. The company had applied to the Nuclear Regulatory Commission for a license to expand.

A little web research informed me, just how rich in uranium the western Great Plains are. It lies in porous sandstone far beneath eastern Wyoming, western South Dakota, and Nebraska. The latest technology draws the stuff from formations laid down millions of years ago.

Crow Butte Nuclear Resources uses a method called In-Situ Recovery. They drill hundreds of feet into the sandstone aquifer. High pressure pumps inject water laced with baking soda into these wells, where it enters the water table and leaches out the uranium compounds. The uranium-rich water is then pumped out a separate well.

Once extracted, the uranium oxides are refined into what’s called yellowcake. You may remember yellowcake. Our government accused Saddam Hussein of buying the stuff as one justification for invading Iraq in 2003.

Crow Butte ships several hundred tons of yellowcake a year to Saskatoon, Canada, headquarters of their parent company, Cameco. Cameco, owned mostly by Canadian government entities, is the largest uranium producer in the world. They’re seriously multinational. Two of their largest customers are India and China. Crow Butte is actually one of their smaller holdings.

As world economic development demands more energy, uranium becomes an increasingly hot (so to speak) commodity. Which is why Crow Butte Resources wanted to expand their operation.

My Web search took me deep into the story behind that plywood sign on the Pine Ridge Reservation. For starters the wastewater had to be dealt with, and radioactive elements which linger after refining. Some wastewater winds up in evaporation ponds, but most got pumped down yet a third series of wells, to be stored in deep rock layers far below the uranium-bearing aquifer. It’s not exactly fracking. But similar technology.

Opponents expressed concern about radioactive dust and radon gas on the surface, byproducts of the refining process. But this N.R.C. hearing, I learned, was mostly to field concerns about underground pollution in the aquifer itself.

We are tied to our planet by interlocked systems, spiraling through time, the water we drink, the food we eat, the air we breathe, the waste we produce, our own bodies. We sustain and are sustained by complex networks. Innovation rises within us, but is not controlled by us. The Crow and Lakota knew this, though they expressed their wonder in ritual and naturalistic poesy. I wonder if they didn’t understand it better than we do.

One example is the spectacular, underground water network called the Ogallala Aquifer, which extends from the Pine Ridge Reservation down through western Nebraska, Kansas, Oklahoma, all the way south to the Texas panhandle. It’s one of the largest underground water sources in the world. Crow Butte sits right on top of it.

That would have amazed my great grandfather, Tom McCarty. Back in the 1880’s he and his wife, Sarah, went bust precisely because they couldn’t figure out how to raise crops with the meagre rainfall on Nebraska’s plains. Other settlers did no better. Ironically, it turns out, their dusty furrows lay only a few yards above a fresh water sea hundreds of feet deep and a thousand miles long.

Nowadays if you fly over that same stretch of prairie, it’s quilted green, circles and squares lush with cash crops. Time and technology bring us high pressure sprinkler irrigation, pumped up from the Ogallala Aquifer.

But here’s the worm in the apple: technology always has fine print. This vast reservoir turns out to be a one-time resource. In just a couple generations we’ve drained it down, 30 feet in some places, but more than 100 feet in others. And we’re just getting warmed up. Population, technology, and water use accelerate each year, like a train rolling down a grade without brakes.

I reflect on this paradox. Technology increases like a breeder reaction, at a rate that takes by surprise even those who created it. We prosper. But resources get depleted, adverse effects blight global life, the energy of our cleverness rebounds in ways we don’t want, but can’t foresee. So far, it’s relatively easy to ignore the depletion in the Ogallala Aquifer. They just drill deeper and buy more pipe.

But on the Pine Ridge Reservation the concern centered on water. Not only was Crow Butte Resources using large amounts of water, they were also exposing the Aquifer itself to radioactive waste.

At the N.R.C. hearing in western Nebraska, the uranium people naturally responded that everything was well in hand. Radioactive dust is carefully suppressed, they said. Radioactive wastewater is stored in impermeable layers far below the Aquifer. Water pressure techniques, they say, keep it from going anywhere within the Aquifer itself. The dropping water level has little to do with their activities, they say. They’re just being model citizens and good job creators.

I don’t have a snappy comeback to all that. I do sympathize with the Lakota at the hearing, who spoke of water not just as a cash account to be drained, but as a living entity. I also have to admit, I like my electric light and creature comforts.

Here’s what really worries me. The dicey side of all this goes back to that same old paradox. Our innovation is stronger than our foresight. We’re so clever, we’re quite capable of inventing a hell that we’re not disciplined enough to control.

One ironic example, Optima Lake, is part of the Ogallala Aquifer equation. Back in 1950 the Army Corps of Engineers set out to fix a dual problem at the Oklahoma end of the Aquifer. Each spring, rains would bring damaging floods along Beaver Creek. Then with summer the rain would quit falling, the land would grow dry, and crops would go thirsty. The solution seemed simple. Build a reservoir to restrain the floodwaters in the spring. Then use that water for irrigation through the summer. Meanwhile, people could boat, swim, water ski, and fish in the new lake. What’s not to like?

Alas, pumping from the Aquifer drastically changed the local water table before Corps of Engineers bulldozers even finished digging. A century ago the Ogallala Aquifer fed the springs that fed Beaver Creek and the larger Platte River. By the end of the 1970’s, even as Optima Lake was being completed, the dropping water level was drying out those springs. The Platte lost a lot of water and Beaver Creek dried up completely.

So by the time Optima Lake was finished, there were no more floods to control. There was no more stream to feed it. Now, even in the wet season, there’s only a puddle where Beaver Creek trickles across the bottom of the empty reservoir.

The Corps of Engineers’ website sums it up best. It would be hilarious, except that it’s not. “Visitors should be aware that the lake’s level. . . may offer no water-based recreation and may not be suitable for swimming, fishing, boating, or other activity. Visitors should come for the quiet natural setting–with or without water in the lake area.”

As a retired minister, I could so write a sermon on that single paradox of postmodern life. A brand-new “lake” too dry to swim in.

In reflective moments, though, my heart sings of our earth, immense and complex, and human beings nipped in the butts by ingenuity that’s larger than our foresight. We can now grow soybeans on fields that defeated my great grandfather’s most ardent efforts. But the floods that once rolled down Beaver Creek and the Platte River, now soak invisibly into the thirsty ground.

Generations ago we exterminated the buffalo and insisted that the “Indians” take up farming, mind you, on the same kind of land that defeated my hard-working great grandfather. Now we have deep well irrigation. But on Pine Ridge Reservation north of Crow Butte, should it be surprising that some Lakota worry about dropping water and pollution from uranium mining?

A century and a half after Crow and Lakota warriors battled there, Crow Butte still holds troubled energy. But the troubled energy isn’t in the land. It’s in us.

The vision that assaults my minds eye, is the well pipe below Crow Butte, throbbing with the gritty swill of uranium mining on the high plains. Down and down the wastewater pumps, through Crow Butte sandstone, past layers where Bison Antiquus and Columbian mammoths roamed, deeper, deeper, through the layers of deadly ash spewed out by volcanic super-eruptions millions of years ago. Even deeper than that, past ever more ancient stone and fossils, to be stored in (of all places, Crow Butte literature informs us,) the Morrison Formation, famous for its Jurassic dinosaur fossils farther west.

We drill through the immensity of age with our diamond-studded bits. Two hundred years ago we never dreamed of such tools or the need for them. We never dreamed of nuclear reactors, either, nor of such creatures as Diplodocus or Allosaurus. Now we flood their bones with our radioactive shit. That’s progress for you. Red Woman, an evil, all-powerful Person of Native myth, once strode these prairies. I wonder, is she laughing at us?