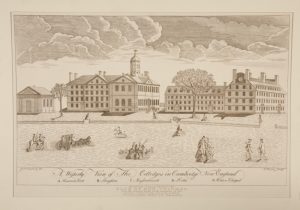 One Irony of the Unitarian side of Unitarian Universalist history, is that we’re structurally descended from New England’s Puritans. As English followers of the notoriously hard-core John Calvin, the Puritans were famously straight-laced.

At first blush it would seem strange that Congregationalists, Unitarians, and others among America’s most liberal traditions, trace our lineage to Calvin. It’s an unexpected evolution.

The driving force for that evolution lies in places like Harvard University, founded in 1636, primarily to train Puritan–later Congregationalist–and then, also, Unitarian–ministers. Because for all the aspects of Calvinism I despise, they did believe in educating their clergy. As a 1640 Harvard brochure put it, their purpose was “to advance learning and perpetuate it to posterity, dreading to leave an illiterate ministry to the churches when our present [English educated] ministers shall lie in the dust.”

If you range America’s religions today on a scale of most-educated clergy to least-educated, it will match up quite nicely with a line from most liberal to most conservative. (The exception might be Roman Catholicism. Then again, Pope Francis is just one more example how hard it is to get a “liberal vs. conservative” handle on Catholics.)

I, for one, want nothing to do with a so-called, “minister” who hasn’t faced down real challenges, both intellectual and emotional, on the path to ministry. What we can see in today’s culture most of all, is that when religion combines with ignorance, the result is a downhill path to delusion at best, then to oppression, and even to out-and-out criminality at worst.

But turning that on its head, if I’m listening to a sermon, I’d like to feel confident I’m listening to someone who has put real thought and effort into knowing what they’re talking about. I became Unitarian Universalist precisely because, as a younger man attending more traditional churches, I got sick and tired of hearing someone hold forth for the umpteenth time about some “self-evident truth” that wasn’t self-evident and, I suspected, wasn’t even true.

Bigger than that, if I need pastoral care around my own sickness and death or that of a loved one, the last thing I want is an untrained, “volunteer” chaplain. If someone’s going to be “on the path” with me through the valley of the shadow of death, I want someone who’s been there before, survived it, and also someone who appreciates that it means different things to different people. They don’t have to agree with me. But I want someone who also doesn’t assume I should agree with them. (Ignorance too often does assume precisely that.)

Why should anyone want a visit from a chaplain who’s there to be affirmed by others, rather than as a support to others?

As a case in point, my better half, Kate, spent some hospital time awhile back. The chaplain dropped in while I was there, a nice enough guy. But in “mansplaining” his own story, he expressed precious little interest in hearing anything from us. He had been an international sales rep for a large corporation before retiring and becoming a “chaplain.” We learned a few tricks of the air travel business, that he appreciated his wife’s patience during his business years, and that–oh, yay!–he had even taken a weekend class once about “how to be a chaplain!”

We listened politely. We were both more tired when he left, than when he came in. He walked down the hall happily. I don’t think he could even have told you why Kate was in the hospital or that I was a retired minister, let alone that we were Unitarian Universalist.

Sadly, that’s the level of “ministry” that’s too often taken for granted in today’s American culture. The common assumption that a minister doesn’t know–or doesn’t need to know–any more about human sickness, psychology, sociology or science than a hairdresser, is a true pity. (Not to denigrate hair dressers. A good hair dresser at least knows how to listen–which is also something not enough ministers do.) Alas, it’s a product of the fact that all too many ministers really don’t know anything beyond a madrassa-style rote memorization of the Bible.

When a person like me, only educated on the basics of the Bible, science, or religious history, can outflank some of the loudest “ministers” in all three directions–it says something.

To put it a gauche way, we ministers are supposed to dedicate our lives to helping people care about the highest things, and about one another, and also to just, plain helping people get through shit. I can’t imagine how someone would see that as easy work, or work that doesn’t require thorough preparation. Not least because, in practice, all too many people resist genuine ministry even as they’re asking for it–or castigating the minister for not providing it.

Like many Unitarian Universalist ministers, I too have been frustrated by our tradition’s educational processes, and also by the Fellowshipping process. It is definitely not without flaw. Like everyone else, I have suggestions how it might be improved.

Then again, speaking only of parish ministry, if a person can’t survive three-five years of divinity school and field education, or get past our Ministerial Fellowship Committee’s probing questions (acknowledging that they were an unpleasant part of process for me,) I can’t imagine how they expect to survive in the average, fractious Unitarian Universalist Congregation.