Roman Catholic Bishop Roger Foys has officially pronounced Covington Catholic High School’s youth free of sin in last month’s dustup at the Lincoln Memorial. “We should not have allowed ourselves to be bullied and pressured into making a statement prematurely,” he says of earlier comments, based on a short video of Covington boys apparently mocking Omaha Nation elder Nathan Phillips with a “tomahawk chop” cheer.

I don’t argue that most of the public, including me, initially reacted with insufficient information. But I also find it significant that someone as powerful as a Catholic Bishop, presiding over an elite (and expensive) boys’ school is complaining about being bullied. That language says more about the people using it than the controversy itself.

I have a lot of respect for much of what the Catholic Church stands for. But  compare Foys’ statement to a real case of bullying from Christian history, a scene from the 1950’s movie, Quo Vadis. The title refers to a phrase St. Peter is supposed to have uttered: “Which way, Lord?” The movie is badly dated in some ways, but there’s one truly stirring scene when Emperor Nero throws Rome’s Christians to the lions. The faithful are terrified when they realize what’s in store. But as the Roman soldiers drive them into the arena, they begin to sing hymns. It doesn’t make their deaths less terrible. But their voices drift across the Colosseum: unshakable faith, even in the face of death. To me, worldly atheist though I am, the effect is still heart-wrenchingly dramatic. It evokes the best in the Christian tradition. Hold this image, I’ll get back to it.

Like our current President, Emperor Nero is depicted as an effete bully. Our President doesn’t use lions, of course, but he does use baseball caps.

For me, baseball caps are utilitarian. I have light sensitive eyes, so I often wear one. I have a bunch of them in varying colors. Headed outside, I just grab one that goes with my clothing. It’s only about the color for me.

Whether I care or not, though, other people do notice a hat’s logo. For example, visiting my daughter years ago in Seattle, I was standing on a street corner when a guy shouted out of a passing car, “Hey, the Cubs suck, man.” I’m not a Chicago Cubs fan. That just happened to be the hat that matched the blue shirt I was wearing.

That did lead me to a social experiment, though, wearing different baseball caps in different settings to see what kind of reaction I would get. We are a symbolic species, and people do pick up on the symbolism of even something as simple as a baseball cap. The police will tell you the same thing. There are, for example, some baseball caps you don’t wear in certain areas of Chicago or Los Angeles, because the logos have been co-opted by street gangs. The wrong one can get you a lot worse than a catcall or dirty look.

Nowadays, I live in Bloomington, Indiana. My better half, Kate, works at Indiana University. After a campus Gay Pride festival one day, she brought home a satirical send-up of Donald Trump’s “Make America Great Again” cap.

In my opinion, the MAGA cap is terrible graphic design. There’s no logo, you can’t read the words at any distance. It’s so bad, in fact, I’m convinced Trump must have designed it himself. In its very clunkiness, though, it’s also the perfect embodiment of Trump’s “bull-in-a-china-shop” political style. So that as bad as the design is on one level, it’s genius design on another level.

This cap didn’t say, “Make America Great Again,” though. It read, “Make America Gay Again.” Kate and I had a good laugh over that. I loved the satire. MAGA hats symbolize Trump’s thinly veiled racism and reactionary policies.  Now some wag had turned that on its head simply by substituting one word.

A month later, I was to meet Kate at the IU campus theatre after work for a date night. When we do this, I always park off campus and walk a mile or so to our rendezvous. It’s a nice walk, I get some exercise, and then Kate drives me back to my car afterward. So what the heck, I thought, it’s time to wear “Make America Gay Again.”

Bloomington is the most liberal town in southern Indiana, but that’s not saying much. This is, after all, the region that produced Matthew Heimbach and the neo-Nazi Traditionalist Workers Party. As soon as I started walking in that glaring MAGA hat, even though it said “Gay” instead of “Great,” I sensed something wasn’t right.

For one thing, you don’t see many men my age walking around Indiana University. When you do, they’re rarely in blue jeans and flannel shirt, wearing a baseball cap. I slowly realized, I could be as easily taken for a Heimbach ally as a retired minister. And I couldn’t shake the sensation that, for all its intended satire, that hat was defining me that way. It felt as though I were wearing a billboard on my head—the wrong billboard.

The clincher came as I waited for Kate in front of the campus theater. A mixed-race couple approached. When the African American man saw me, his body visibly tensed and he got this uncomfortable little smile I have sometimes seen African Americans get when confronted by some casual form of racism. (Yes, Euro-Americans get it, too, but not for the same reason.) To me, his whole body language was “Well, crap. Here we go again. One more piece of white racism, it can pop out any time, there’s no refuge from this shit.” That’s what his smile told me.

They didn’t get close enough to see the cap’s joke, but turned and walked away. I don’t know if I blushed. But my joke didn’t feel funny any more. It felt as though I had, in a small and careless way, hurt a fellow human being.

That was a teachable moment for me. I have shown the cap to friends since then, but I don’t wear it outside. The design itself is the message, and it’s a message that gets sent before someone even gets close enough to see how the message is flipped on its head. I definitely learned, MAGA hats are powerfully hurtful for people stuck in the onrushing grille of Trump’s politics.

So there they were in January, this brigade of Covington Catholic High School boys milling around the Lincoln Memorial, many of them wearing those powerful symbols of the very thing the Memorial opposes. In fact, as symbols of Donald Trump’s politics, the MAGA hats also symbolize policies Catholic doctrine opposes. Donald Trump and the Church may agree on abortion, at least officially. And the boys had been bussed there to take part in a massive, anti-abortion march. But the Church also teaches economic justice and immigration justice, which Trump totally opposes.

What this tells me, is that these young man’s supposed adult supervision were not paying attention to their own responsibilities as religious guides. Whether I agree or disagree with the Church on abortion rights is not the point.

Following the march, the adults then left these youth at loose ends for an extended time. There are often groups “having their say” around Washington D.C., particularly on weekends. But no one seems to have prepared the boys to encounter anyone who might disagree with them on any issue.

I see that as a function—frankly—of laziness and white privilege, combined. They plainly assumed their own viewpoint was so normative, other viewpoints came as a surprise. Alas, who should be making speeches that day but an extreme sect of so-called Black Hebrew Israelites, listed by the Southern Poverty Law Center as a hate group. The Covington High School kids were abandoned by their adult supervisors and over their heads from the first word.

Again, there’s much to admire in Christian teaching. But referring back to the Christians in Quo Vadis, singing while being fed to the lions, these kids went to Washington with no thought of behaving like Christians, but assuming they could act like lions. Granted, the Hebrew Israelite rhetoric was hateful. But where was Jesus’ teaching on what Christians do in the face of hatefulness?

Without guidance or preparation from their elders, the best these boys could fall back on were cheers they’d picked up at high school sporting events. Then Nathan Phillips added his Native chanting to the mix and things just went downhill from there.

It was all unfortunate. I do feel a degree of sympathy for the boys. First there were cries of racism from the left, then complaints from the right about liberals “rushing to judgment.” Pundits punditized, and we wound up largely with everyone more entrenched than ever in their original opinion.

But there was a teachable moment, here, and one mark of the boys’ social privilege is that it passed unnoticed. To me, it’s not that these boys were particularly racist or bad young men. I was once male and seventeen years old. It’s not a combination typified by wise, respectful behavior. But it says volumes that Bishop Foy complains about being “bullied.”

This is the complacency—fragility—that go with white privilege in an economically hierarchical, systemically racist world.  Not just on the part of the young man, again, that’s to be expected. But on the part of the adults. I see a failure to match what the school ought to be teaching—Christian behavior—with the actions that were allowed, even encouraged. And while I can excuse the youth, it would be an abandonment of principle to excuse the adults. What is it they’re pretending to teach these kids?

For one thing, the MAGA hats demonstrated, these boys weren’t just there to stand up for the “rights of the unborn.” A good many of them were—consciously or unconsciously—representing Trump’s reactionary politics, much of which Catholic doctrine exposes as hateful. For another, it’s lucky the hate group they encountered was small. Had they been more numerous, unsupervised as the boys were, things could have gotten really ugly.

Punditry aside, there are lessons we can all take away from this snafu. There are layers of meaning to the things we do, yes, even the clothes we wear. White privilege doesn’t often need to worry about the significance of a baseball cap. That’s what we saw. But aren’t these the very discussions that should take place at a supposedly superior private school? And among thoughtful people of all walks of life? 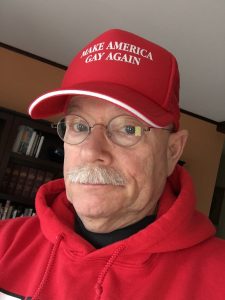 I don’t really disagree that the young men didn’t really “misbehave” that day, as much as they just acted like privileged youth. Then again, one would think it would be the job of the adults who were with them to teach them the tenets of their own (professed) faith, including the virtues of humility and compassion. And oh, by the way, that making political statements in support of a President who has no more use for their Church’s teachings than the Emperor Nero did–well, it was the adults who misbehaved. Or just allowed the young men to stray with no consistent teaching at all–which is a kind of misbehavior all in itself.

One hopes the next busload of Covington Chaparones actually care about the young people in their charge. I don’t get that these did.