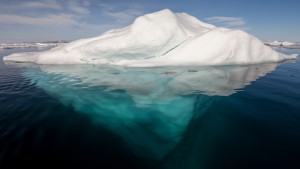 Arctic Iceberg with its underside exposed, by A. Weith

I write about my Post-Traumatic Stress Disorder not least because I am in a relatively safe place to do so. Being retired, my income no longer depends on what people think of me.

My mental illness makes me no less compassionate, inquisitive, or creative. It simply means I have an extra hurdle now and then. It may even constitute part of the gift I try to share with the world. No person should be judged solely by their handicaps, and I shouldn’t either. Sadly, that does still happen, and not just to people with PTSD.

Writing about my Post-Traumatic Stress Disorder, even trying to fully understand it myself, can be like reaching into a box of snakes. It’s not just that some may be poisonous while others aren’t. Even more, it’s hard to know where some snakes end and others begin. Sorting them out in treatment, provides some answers, but not all.

My PTSD diagnosis definitely changed my life. But I’m still puzzling over it and learning to dance with it. I wonder if anyone ever fully understands their own mental illness. Considering that mine is also partly physical–altered brain chemistry–I can guess that I won’t fully understand it till my body does. Like the holy itself it’s a lived condition, not just a theory.

In my reading, I learn that some PTSD sufferers can pinpoint the precise event or chain of events that produced their condition. I can’t. My PTSD seems to have multiple, convoluted story lines. Back to that box of snakes.

I was first diagnosed late in life, a month shy of my 64th birthday. In part, it was a blinding flash of the obvious. I was subjected to long-term sexual abuse as a child, then extensively bullied in middle and high school. Through my life, particularly as I grew older, I would sometimes struggle in group situations. That was particularly so if they were chaotic or there was hostility present. To the extent that it provided insight, my diagnosis was actually somewhat a relief. At least I could begin to understand what was wrong with me.

But other kids have been sexually abused. Other kids have been bullied. They don’t all have PTSD. What’s more I served four years in the military: basic training, a service school, even some hazing when I first reported aboard ship. I dealt with all that about as well as anyone else there. Receiving my Honorable Discharge at the age of 26, I didn’t dream I had a problem.

I did my share of “macho guy” stuff as a younger man. I hunted. I drove race cars. I supported my novel-writing habit by doing heavy construction as an electrician. I was thoughtful and sensitive as construction workers go, but that’s probably not saying a great deal.

In my ’40’s I taught English conversation at a language institute in South Korea. That’s a stressful existence. Fewer than 50% of American teachers were able to stick out their one-year contracts. Most hightailed it back to the States after six or seven months, which is when culture shock really sets in. I did three years. Korean culture had its challenges for me, too, but also its rewards. I learned a lot, developed high regard for Korea’s national journey, and made friendships that are still with me. The school where I taught even looked on me as a stabilizing force in their roster of American teachers. Again, when I left I never suspected I had PTSD.

So my diagnosis answered some questions, why I could react so strongly in some group situations, why I often had nightmares. But it posed others. How had I even gotten through college, military service, a stressful overseas job, divinity school, and a ministerial career without having far more outbreaks than I had?

A couple months ago a colleague posted on a Unitarian Universalist Facebook group, referring to what he called, “Complex PTSD.” I had never heard that term. Intrigued, I eventually got around to doing a Web search on it.

I found myself back at the Veterans Administration website, which had been very helpful to me early on. It carries a lot of information on PTSD. I hadn’t read their Complex PTSD page, though, primarily because it was in a section marked for “professionals” and “researchers” rather than the public.

One implication, of course, is that a layman such as myself needs to be careful about self diagnosis. C-PTSD is not yet listed separately in the Diagnostic and Statistical Manual of Mental Disorders. Research is apparently still accumulating.

Even so, some distinctions between PTSD and C-PTSD are creepily resonant for me. PTSD, it says, is a response to a discrete trauma, say, a combat experience, rape or assault, a natural disaster, or an accident. C-PTSD derives from “chronic trauma.” The website uses such phrases as “long-term trauma,” “unable to get away,” and “prolonged period (months to years) of chronic victimization.”

I won’t go into a lot of details of my deep past. I haven’t fully sorted out that box of snakes myself, I’m certainly not going to subject a reader to it. Suffice to say, for much of my childhood, I didn’t think of myself as a “victim” at all. Regarding my sexual abuse, I just thought of myself as “bad.” When I thought of it at all, which was hardly ever. I did think of myself as a victim when the bullying started. But like the sexual abuse, it was just the way things were, nothing anybody could do about it.

I only mention that because, if you ever spot a kid in the same situation, they’re probably thinking the same thing. Tell them they deserve better, will you? You might just change one fellow human being’s world.

Anyway, some C-PTSD symptoms, as opposed to PTSD, resonate deeply. One example, one website states, “Those with C-PTSD. . . have a virulent inner and outer critic.” When I underwent my psychological evaluation to enter ministry, the psychologist pointedly said, “You can go easier on yourself.” Some later counsellors have also referred to my relentless inner critic, and I have worked on that.

Other resonances also give me pause. Again, I don’t want to belabor details. Suffice to say, paraphrasing Annie Dillard’s Pilgrim at Tinker Creek, I am battered and bruised and have been nibbled, and have done some nibbling myself. But I am doing okay.

One aspect of my C-PTSD that breaks my heart, is that for the time being I am keeping myself away from public acts of witness. With all the research I did last year into Lakota, Crow, and Cheyenne history and survival, that makes poignant the ongoing witness at the Oceti Sakowan camp in North Dakota. But I must be content for the time being, to support the Water Protectors from a distance. I believe the last thing they need, is for me to “go ballistic” during some high-tension scene with state or federal authorities.

That brings up an important point. One information source, the “Out-of-the-Storm” website, states, “C-PTSD is a stress disorder, [italics in the original,] not a weakness or defect of character nor is it a personality disorder although it is often diagnosed as [such].”

C-PTSD is not just a discrete thing. It certainly has caused me difficulty at times, but I’m not even convinced it’s totally an affliction. More than just a box of snakes, it may also be a wind chime or mobile, made of multi-colored prisms.

To wit: I’m a deeply empathic person. Do my pronounced empathy for the oppressed and unfortunate, and my deeply reflective nature, also derive in part from my “chronic” exposure to injustice and trauma? The material hints at the possibility. Was reflection a relatively healthy “safe space,” to which my mind could retire and build context? If that’s where the “gentle” comes from, what about the “atheist?” “Lack of a sustaining faith” is specifically listed as another symptom. Yet context was built, I did seem to develop a sense of who I am and where I fit. Sometimes you can’t tell the prisms from the snakes, let alone the snakes from each other.

I suspect we could all “go easier” on ourselves and each other. Ministers included. No form of PTSD constitutes a weakness of character. We are all “more sinned against than sinning,” as Shakespeare would put it. Far as that’s concerned, sin itself is a misleading term. We human beings careen against one another, knock chips off one another in the chaos. Life is a messy business, that’s all.

What I know for certain, is that we do need to talk about this stuff. We need to talk about it until behavioral health is no more controversial than physical health. Until we discuss mental illness with no more reserve or stigma than influenza.