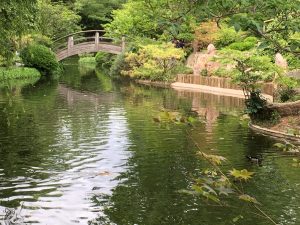 Some of my most intense religious formation came during my chaplain residency at a large teaching hospital north of Chicago. One day a week I would bring my guitar onto my assigned unit. I would do what I called “corridor concerts:” singing in the hallway rather like a wandering minstrel.

I kept the volume low enough, patients could just shut their doors if they didn’t want to listen. If the door stayed open and the situation seemed to call for it, I could even stop and do a pastoral visit.

In April, 2001, I had a particularly poignant visit with a young, African American woman. When I looked in on her she smiled at me. “You have a beautiful singing voice,” she said. I thanked her and asked, “Would you like to chat for a bit?” “I would,” she said, and I pulled up a chair.

The conversation was general and thoroughly Christian. She was tiny, rather wan looking, but unfailingly upbeat and friendly. I asked her if she’d like me to sing her something. (I always carried along my worn copy of “Rise Up Singing,” the folk singer’s Bible.) She named a few Gospel numbers with which I was not familiar, but we got together on “In the Garden.” She began to to softly sing along with me. “You have a beautiful voice yourself,” I noted.

We sang “Amazing Grace” and then she offered to “sing you my favorite song.” And began.

Her voice was soft but the song seemed to gather her in and lift her in the very singing of it: “The Lord’s been good to me.”

“He’s been bread when I’m hungry,
Been a comfort when I’m lonely,
And he kept his arms around me. Yes the Lord’s been good to me.”

It was a pleasant visit from my point of view. Her Gospel song seemed to refresh her, as well. We shook hands and I went back to singing my way down the hall.

Later, in charting our visit, I saw that her age was 28 years and the presenting problem for this admission was “persistent elevated temperature.” Farther down I saw to my surprise, this was a symptom of her diagnosis: HIV positive. “Oh, my God,” I reflexively murmured to myself. That was something I hadn’t expected. A nurse happened to be standing beside me. She heard my exclamation, looked down, and smiled sadly. “1128? Yeah. She has full-blown AIDS.”

Even writing this many years later, I fall silent. It doesn’t matter where her HIV came from. It was a lingering death sentence in those days, a young life robbed of promise. Yet this woman sang “The Lord’s been good to me” when I would see her condition as anything but.

A cynic might snipe that the line between courage and self-delusion is so thin you can see right through the weave of it. But my reply would be, “So do you have something better for her? Or even half as good?”

This woman amazes me to this day. My atheism might be “just right” for me–but does that make it “just right” for everyone? How arrogant–and blind–would I have to be to think that, in the face of the courage she derived from her Christian faith.

I look back at her in awe. I have no idea how much dismay and grieving she went through before we crossed paths. But at no stage would I be able to carry her condition with the calm and equanimity she displayed. And I’m not going to hold my breath till I develop to that point.

“Cultured despisers of religion” are fond of quoting Karl Marx, that “religion is the opiate of the masses,” as though it really is delusional.

But such cheap-and-easy dismissal is wrong on two levels. First, it incorrectly conflates “religion” with belief in God. I don’t believe in God and I consider myself religious. Zen Buddhists are also deeply religious, but God is irrelevant in Zen.

But on a more profound, important level, that facile Marx quote distorts what he actually wrote, which is beautiful and profound. The complete paragraph runs, “Religious suffering is, at one and the same time, the expression of real suffering and a protest against real suffering. Religion is the sigh of the oppressed creature, the heart of a heartless world, and the soul of soulless conditions. It is the opium of the people.”

He goes on to advocate a “criticism of religion” (or better, I think, criticism of religious institutions) that abolishes religion as “illusory happiness” in order to abolish “a condition that requires illusions.” That’s very different from the religious criticism you hear from the Bill Mahars or Richard Dawkins of the world.

This is not to give religious institutions–or religious politicians–a pass on the ways they manipulate and exploit people. But what about the Dietrich Bonhoeffers and Martin Luther Kings of the world, who use theistic religious faith as fuel and courage to–as Bonhoeffer would put it–throw themselves into the wheels of injustice and really act against Marx’s “condition that requires illusions?”

This question humbles me: am I an atheist precisely because of my own privilege? Precisely because I don’t bear a cross large enough that I need to construct a theology around it?

In my view, atheist though I am, I have no business making light of others’ ways of coping with afflictions I have never had to bear. I feel only awe toward their courage and resilience, whether or not I philosophically agree with the source.