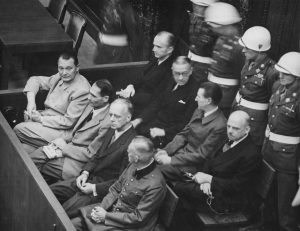 I’ve been reading and binge-watching, of all things, documentaries on the Nuremberg War Crimes Trials. My motivation lies in current events. If we’re going to compare the Trump Administration to the Nazi Party and Trump to Hitler, we should study the real thing.

We are awash in both similarities and differences. As one difference, the Nazis combined intense nationalism and racial scapegoating with a genius for ultra-organized violence, which Trump and his Cabinet don’t match at all. Race hatred, nationalism, and lust for world domination through violent means, lay at the center of Naziism. Acquisition, by which I mean looting their victims, was only a profitable sideline.

Trump shares the nationalism, of course. But we’re increasingly learning that his (and his family’s) prime motive is acquisition. They seem to look on government and diplomacy as their cash cows, slush funds to advantage Trump and Kushner enterprises. Twisting the Nazi dream, military domination, violence, and even racism are relative sidelines.

Trump is not Hitler. To Hitler, war was a clear foreign policy goal. As soon as he met cross currents in international diplomacy, the panzers started rolling. Trump scuffles with or “flips off” other national leaders at a summit conference. Hitler loved war and won an Iron Cross as an enlisted man. Being a child of plenty, Trump never served at all. And there’s little indication he puts much thought into war at all. He’s more likely to aimlessly drift into a war.

More pointedly, though, late in the Second World War, Hitler comforted himself by watching films of “traitors” being strangled to death with piano wire. Trump just tweets. Hitler’s government was a bloody horror show. Trump’s is a comedy full of fart and barf jokes.

On the other hand, historian William L. Shirer wrote that the most distinguishing feature of the Nazi government was not their evil genius, but their overriding mediocrity. Trump’s Administration has that in spades. The Nazis were, as Hanna Arendt put it, a study in “the banality of evil.” Only time will tell how wide or deep the Trump Administration’s evil will go. But the banality is already there by the bushel.

Even more striking is the match, not between the two Administrations, but in their enablers. When Hitler was on the rise, German military and business leaders considered him a buffoon. They supported him only in furtherance of their own agendas. Looking at Mitch McConnell’s and Paul Ryan’s attitudes toward Trump, the resemblance is uncanny. Hitler may be a horror while Trump is a dirty joke, but their enablers were–and are–identical.

Watching (and reading) accounts of the Nuremberg Trials, I feel compassion for some of the defendants. Not for Rudolf Hess, who was fanatical and crazy right to the end. Or Joachim von Ribbentrop, too self-pitying for anyone else to care. Or Hermann Goering, who considered the Nuremberg Court just one more audience to manipulate. They were engaged Nazis from the start.

But others, like McConnell and Ryan, thought they were “using” an irresponsible political force to further their own political agenda. They drifted into the real evil. Take Hitler’s first finance minister, Hjalmar Schacht. He underwrote Hitler’s early aggressions, then jumped ship when he realized the full horror he had helped finance. He landed in a German concentration camp for his troubles. Then, after Germany surrendered, found himself on trial alongside the worst war criminals.

Or take some of the military men. Military psychologist and translator, Gustave Gilbert, interviewed each defendant at length. Two fascinating figures in his book, Nuremberg Diary, are Hitler’s defense minister, Wilhelm Keitel, and chief of staff, Alfred Jodl. Career Army officers, they considered themselves honorable and above politics even as they signed on to the Nazis’ rise to power because Hitler would enlarge the military and “make Germany strong again.” From there they descended, step-by-step, till they were enabling Hitler’s aggressions and rubber-stamping unimaginable atrocities in conquered lands.

By the trial’s end, their rank and military “honor code” were stripped away. They found themselves revealed in the harshest light: criminal functionaries doomed to criminal deaths. As military men, they both said, they were prepared to die. But death by hanging was, they said, humiliation beyond words.

I feel some compassion for that, their ghastly self-realization, disgrace, and despair. Of course I have to feel exponentially greater compassion for the millions they hastened toward miserable deaths, or lives that were no better than death. We can take the atrocities of the Holocaust for granted, now. I can only imagine the gasps that filled the courtroom–and living rooms around the world–when the full Nazi horror came to light. It all happened step by accommodating step, one ethical short cut at a time, for what seemed “realpolitik” reasons, in each increasingly evil moment.

I meanwhile read in the newspaper that, on some level, awareness of his own incompetence may be dawning on Trump. While it’s one of the most powerful jobs in the world, the Presidency is also one of the most accountable. I doubt Trump has the perception or honesty to acknowledge his own role in his increasing difficulties. But USA Today reports on evidence of sleep deprivation, including Trump’s now-infamous “covfefe” tweet. I wouldn’t want to be him right now. As the law and politics close in, I wouldn’t even want to be anyone in his inner circle. Then again, that may be a sign of my own naivete. Trump could get impeached tomorrow and he and his cronies would still be exponentially better funded than anyone I know.

As with Schacht, Keitel and Jodl, though, I feel far more compassion for Trump’s victims. A lot of people are going to get hurt by this Administration. That includes a lot of people who voted for Trump. But more poignantly, it also means innocent people who oppose his knee-jerk, billionaire-serving policies. And perhaps most importantly, our children.

We can only hope our democracy survives Trump better than the Third Reich survived Hitler. Even if it does, the environmental and social damage will linger for generations. After Nuremberg, people talked about “the flaw in the German character.” We now see, it’s a flaw in human character. We now see that anything which happened anywhere can, in fact, happen here.