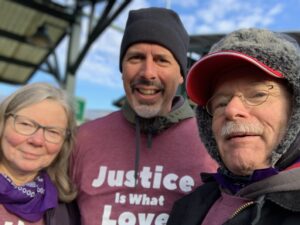 Rev. Forrest Gilmour, my better half, Kate, and myself at a witness against white supremacy in 2019

My latest book, Ahnungslosigkeit: the Education of a Clueless White Man, will not be published till late this summer. In the meantime, here is a “sneak preview” of the Epilogue. (Now you don’t even have to buy the book to see what I’m driving at. How cool is that?) 🙂

Indigenous Australian artist and activist Lilla Watson has been credited with the oft-used quote, “If you have come here to help me, you are wasting your time. But if you have come because your liberation is bound up with mine, then let us work together.”

I believe that as a straight, White male, I particularly need to keep that quote in mind. Through my long life, I now admit, I have been subject to White savior attitudes and ignorance about the lives of others that “stepped on” my own best intentions—not to mention the sensitivity and welfare of others.

My book reflects on my own experience partly as a “note to self,” but also partly in hopes that it might provide useful context for others, particularly my fellow members of America’s so-called “dominant culture.” Our diversity in human strengths, weaknesses, and characteristics can be a boon and source of strength for humankind. But there is so much I believe we need to learn from one another.

Sharing my own blunders and misadventures has, at times, been difficult. Reading them may prove difficult, as well. (I congratulate readers who make it to this point when the complete book becomes available.) But as I see it, there is no “sin” in committing a blunder. That’s part of the human condition. The sin would lie in refusal to step back and reflect on how the blunder might be corrected rather than repeated. I’m continually surprised at those—admittedly including a great many straight white males (and a few females) similar to myself—who have refused or been unable to do so. Uncomfortable work though such reflection may be, I believe it is crucial work in an ever-more-complex world.

As I write this, my religious tradition, the Unitarian Universalist Association, is ensconced in a “new controversy.” I don’t personally believe Unitarian Universalists should be dismayed by this. Given our historical emphasis on congregational and individual freedom and independence, controversy is in our genetic makeup. With very few misses, we seem to produce a new tangle every generation or so.

At the same time, neither should we dismiss this particular controversy. Because this one, perhaps more than any that have gone before, is less about what different factions believe, and more about how we are resolved to treat one another. Ours is a relational religion. It falls if we refuse to make ourselves accountable to those who seem easiest and most tempting to mismeasure or ignore completely. If there is a threat to Unitarian Universalism’s future, that is where it lies. Without our relationships, any religious significance we have begins to fall away, and we really do become “just a club,” as some have accused our tradition.

Having been mismeasured myself, I didn’t like it one bit. What’s more, to return to the Lilla Watson quote, others’ dismissal of my full self prevented me from contributing what I could have/should have been able to contribute in the gathering of ministers I describe in the book. But my experience of marginalization was an anointment of flower petals, compared to what all too many marginalized identities experience on a regular basis—within our own ranks.

Do our liturgical words, including our (so far) Seven Principles, actually mean what we say they mean? Will we, as Rev. Dr. Martin Luther King put it, allow “loose and easy language about equality, resonant resolutions about brotherhood [to] fall pleasantly to the ear” while “with each advance [of non-white, non-straight, non-cisgender, non-able, or otherwise—in so many ways—marginalized populations,]  “promptly raise the argument that the [said non-straight Euro-American members of our culture] have come far enough?” Will we return to claims that we need not listen to the experiences of the marginalized when listening is uncomfortable or inconvenient? Or that we need not/should not install the marginalized into positions of authority if their mobility scooters, accents, appearances, or cultural realities take us outside our own comfort zones?

We must live into those questions. Because, make no mistake, the current controversy within the Unitarian Universalist Association is not about history—or philosophy—or theology. It’s not even about “reason,” “reasonableness,” or “Enlightenment values,” despite claims that it is. Those are merely code words which advocate the bad old hierarchies of the mid-twentieth century.

Having read the growing array of reactionary screeds from those who would return to that (not) “golden age,”  this controversy is all about Martin Luther King’s caution about the dominant culture’s “ever-present tendency to backlash.”

People outside the Euro-American mainstream have not, in my opinion, “come far enough.” We need more BIPOC, people, more LGBTQI people, more people with visible disabilities as part of our religious leadership and membership. Because “your liberation is bound up with mine”—and our liberation is bound up with the beautiful—even if admittedly challenging—dance with diversity—whoever “we” and “they” seem to be. We of the dominant culture are only beginning to learn how we practice, benefit from, and participate in exclusionary attitudes we claim to abhor.

Given the discomfort inherent in that processing, it should be no surprise that some people do reject that discomfort; or that they form echo chambers of complaint on the Internet, and attempt to shout down humility, discomfort, and self-awareness.

Let me respond this way—because this is crucial. I seriously doubt there are many (if any) religious liberals who are more ahnungslos—clueless—than I have been, all too many times. I seriously doubt there’s anyone who has made dumber cultural mistakes than I’ve made. If I had learned what I ought to have learned from even half my mistakes, I would be a wiser man today than I can honestly claim to be.

No one needs to be embarrassed or ashamed of their mistakes. Only willing to name them and learn from them.

When I have learned something worthwhile, it has often because someone outside my zone of experience named it. Responding to and learning from such naming has almost always required uncomfortable reflection. Most important, it has involved the gift of hard work and enlightening words and actions of a community of people, of all stations, struggling the same way I’m struggling and sharing insights from which I might benefit.

In this difficult, increasingly dangerous world, if we are to progress toward a healthy future, it requires acknowledgement of the wonder of human variation—and the tragedy of social marginalization.

It requires us to cooperate and benefit from the insights of people who do not experience life the way we do. It requires us to acknowledge uncomfortable realities with uncomfortable names: institutional racism, white supremacy culture, ableism, homo-and-trans phobia, patriarchy, white fragility, on and on. Because each one of those realities—and more—is one more concrete block in the same prison. And that prison incarcerates all of us, though in subtly different ways. “Your liberation is bound up with mine.”

Meanwhile, I’ll just continue to try to do the best I can. Try to listen to other people when they offer me a new lens on the world, even when that involves non-congenial facts. I still forget, sometimes, to strive after “emptiness” in the Heart Sutra sense. I fall down six times, get up seven times, as the dharma teachers instruct, trying to keep in mind that when it comes to social justice: humility and courage are often the same thing.

I say this: a person should never have to verbally distort reality, misdefine words, or leave out half the story to make their case. Which, I might add, is my primary gripe with the current pastiche of reactionary dogma being spread around our tradition. The person who sexually abused me for years during my childhood was a compulsive and prolific “gaslighter.” I react particularly badly to those tactics. Don’t even start.

One reason I most distrust today’s crop of Unitarian Universalist reactionaries is that I’ve watched too many of them take factual shortcuts or bully people into silence. It was no “golden age” when, as Black theologian James Hal Cone put it, White liberals could be the Black person’s “friend” without really having to risk the privileges of their own Whiteness. Cone challenged us to choose a side. It’s time we did so.

Let us leap into the risks and rewards of a changed future and the diverse community which is the work and reward that future holds. People like me, if we are to progress toward a healthy future, will need to sacrifice some comfort to achieve that. But I truly believe that the partnerships will be worth it.

Having begun this volume with a quote from Martin Luther King, then from a Sutra, then a song by Joan Baez, I conclude with a poem out of my own “emptiness,” drawn from the aspiration of King’s era:

“What  Shall I Overcome?”

By all people to the challenges and rewards

Life has to offer:

As a privileged, white male professional, what is it

That I can even profess to overcome?

It is given unto me to overcome my own comfort.

My own entrapment in unasked questions

In those things I so easily am allowed

To believe without challenge—

Rather than an objective, universal fact.

It is given unto me to listen, humbly and humanely,

To people whose experiences are different from mine.

To honestly and uncomfortably ponder realities

Which are subtle, outside my conveniently

Realities which society will never demand

That I learn for my own safety or survival,

Yet which are essential for the very safety and survival

Of neighbors, co-workers, millions of others,

Bound by rules invisible to me,

Yet painfully obvious to them.

It is given to me to overcome my own ego,

To reduce the distance, chip away at comfortable illusions,

Non-thoughts about lives that NO! are not like my life!

Are not to be judged by the standards of my life!

Are whole and complete in themselves,

Their whole and complete selves,

With a wholeness that can, and will, reach out for me as well,

If only I can spy it out

On the other side

Of what I think I already know.