Custer's Last Stand didn't begin at the Little Bighorn. It began at the Washita 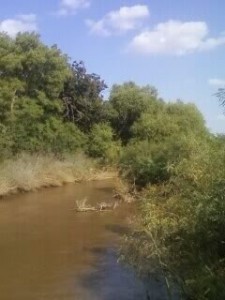 This weekend will mark the 140th anniversary of George Armstrong Custer’s demise–along with 250 men under his command–at the Little Bighorn River in Montana.

For insight into how and why Custer and the 7th Cavalry met such a fate, we need to start with the previous decade.

Picture a wintery scene: Nov. 26, 1868. A stream called the Washita winds into Oklahoma. Cheyenne and Kiowa villages stand along the ice-rimmed water like a string necklace. In the pre-dawn cold, the farthest village downstream still sleeps. Smoke from a few lingering fires wisps up from the smokeholes atop their teepees.

Meanwhile, dark-coated horse soldiers ease into position. Ghostly figures in the moonlight, the 7th Cavalry moves in for the kill.

No one speaks. The men have been ordered not to even dismount and stamp their feet to keep warm. They can only lean forward and wrap their arms around their horses’ necks for what little warmth that provides. Their breaths billow in soft jets.

Here’s how badly their commanding officer wants silence: he loves dogs. He owns several and takes them everywhere he goes, including on this expedition. But when scouts spotted this Cheyenne village–to make sure of absolute silence–he ordered all the dogs to be strangled with ropes and stabbed to death with bayonets. He’s not about to let even a stray bark reveal his approach. The officer’s name is George Armstrong Custer.

Now the sun shoots red rays above the horizon. Bare branches cast the first, naked shadows of day. The bugler blasts out “Garryowen,” the 7th Cavalry’s regimental march, and horsemen charge into the village from four directions, shouting and shooting.

A sleepy warrior named Double Wolf stumbles from his teepee and is the first to die, falling in a hail of soldiers’ bullets. Chaos reigns as men and women tumble out of their furs, stagger from teepees, run shouting and screaming. Some try to hide in gullies, others run down the icy river, their bare feet splashing. Soldiers ride after them, gunning them down as though in some kind of crazy hunt.

Black Kettle is a 67-year-old Cheyenne Chief. He owns an American flag the government gave him when they made peace. They had promised that as long as that flag flew over his teepee, the Great White Father would protect him and his people. Black Kettle already knows what a lie that was. Four years earlier, citizens from Denver City had raided his camp on Sand Creek in eastern Colorado. He and his people had huddled under that flag, but it had only made them better targets.

Now it’s happening again. Black Kettle runs from his teepee amid the tumult and manages to find a pony. Old and stiff though he is, he vaults onto its back, grabs its main, and rides it back toward his wife, Medicine-Woman-Later. He grabs her by the arm and hauls her up in front of him.

They gallop across the river, water flying from their pony’s hooves. But a bullet strikes Black Kettle in the back. He falls with a cry, Medicine-Woman-Later falls with him, and they land in a tangle in the icy water. Scrambling to her feet, she tries to drag him to the bank, but he’s too heavy to move. She stands above him, crying and tearing her hair, till a bullet strikes the back of her head. She falls across him and their blood mingles in red, cloudy streams down the icy water.

Custer’s second-in-command, Major Joel Elliot, sees several young Cheyenne men leap onto ponies and tear off upriver. “Come on, boys,” he yells. “Let’s get ’em.” In half a minute, he’s leading 20 men in pell-mell pursuit. “Here’s to a promotion or a coffin,” he yells as they gallop out of sight.

In the village, the “fighting” lasts only a few more minutes. Final gunshots echo over the icy water as Custer orders men to round up the surviving women and children. He sets others to counting captured goods and bodies.

That takes time. They drag blankets, dried meat, robes, weapons out of the teepees and stack them in the center of the village. They also corral 53 captives, along with 800 ponies that had been grazing along the stream’s bank. “We can’t take those horses,” Custer says. “They’ll only delay us.”

“What’ll we do with them?” asks Custer’s adjutant, Lieutenant William Cooke. “We can’t just let them go. The Indian villages upstream will just take them.”

Custer stares at him. “What villages?”

“The scouts just came in. There’s a whole string of camps along this river. They’ll be down on us before long.”

“Nobody’s seen him since he and half of “G” Company took off after a bunch of bucks.”

Custer curses. Elliot should have asked him first.

Off to one side, captive women and children huddle miserably, shivering in the cold. All around, soldiers run in and out of teepees, gathering gear and stacking it to be burned.

“All right,” Custer says. “Get blankets for these hostages, and ponies for them to ride back to Camp Supply.” He stands in his stirrups. “And burn those teepees,” he shouts.

“What about the other horses?”

“We can’t take them. You’ll have to kill them.” As if to punctuate, he draws his revolver and shoots the nearest pony. The bullet strikes with an audible thump. It rears convulsively, then gallops a little way through the brush, then collapses and lies still. “Tell the men to use sabers or hatchets,” Custer commands. “Slit the horses’ throats. Don’t waste bullets.”

Cooke salutes and trots away, calling to men. In a few minutes, Custer can hear the first eerie whoops from horses, final breaths trumpeted through slashed windpipes. The Native women hear it, as well. They begin to moan and tear their hair. Here and there, a gunshot drifts through the air. Flames crackle as the first teepees blaze up.

“H” Company Commander, Captain Frederick Benteen, rides up. “Have you heard from Elliot?” he asks. “He’s still not back.”

“Damn him,” Custer says with a grimace. “He didn’t ask me. He had no right.” He spits out the next six words: “No. I haven’t heard from him.”

“All right. I’ll take some men and see if I can find him.”

“The hell you will. Your duty is here.”

Benteen stares at Custer. The Captain’s pale gray eyes glint in the morning light. “Look, Colonel, those men could be in trouble. We have to find out where they are.”

Custer glares back at him. “Elliot acted without orders. He took it on himself. He’s on his own.”

Benteen’s mouth works. Then he salutes and rides away, muttering to himself. While the soldiers finish burning the village, Custer rides upstream a way. In the distance he can see teepees silhouetted on the horizon: one village, then another, just as Cooke told him. Around the teepees of the nearest village, he sees men on horses, milling about.

Dammit, he thinks to himself. This is trouble. He gallops back to his men. Teepees, lodge poles, robes, hides, blankets burn and crackle. Greasy smoke rises thickly and the air stinks with burning meat and hair. “Cooke,” he screams.

Lieutenant Cooke rides up and salutes. “Form up the men,” Custer shouts. “We’ve got to get out of here right now.”

“What about Elliot and his men?”

“They made their decision. We’re not going to get caught out here because Elliot wouldn’t follow orders.”

Cooke passes Custer’s commands along. Men organize and climb onto horses. Custer pays no attention to Benteen, who’s glaring at him from a distance. Within a half hour, they’ve started back toward camp supply. When Cheyenne and Kiowa warriors start to gather on a low ridge on their left flank, Custer orders the women and children moved to that side. Seeing the hostages, the warriors shout and shake their weapons, but do not attack.

So the mighty 7th Cavalry makes its way back to base, shielded by Native women and children. When they arrive, they find waiting for them none other than Western Theater Commander, General Philip Sheridan. The timing is perfect. Custer had been in trouble–nothing new there. Sheridan had specifically requested him to lead this expedition. Now Custer can show the General his trust was not misplaced. Custer’s account of the “battle” loses nothing in the telling.

Two weeks later, Major Joel Elliot and his men still not having turned up, so a battalion rides back to the Washita River to look for them. The detachment finds their remains two miles from the burned village. They were cut off and surrounded–almost within sight of Custer and his men. Their frozen bodies have been stripped and horribly mutilated.

Elliot was Captain Frederick Benteen’s close friend. Benteen is dismayed but not really surprised. How a commander could ride away without finding out what had become of his own men–even Custer–Benteen cannot understand how any man could do that.

Benteen stews for days. In an off hour, he sits and writes a bitter letter to another old friend, stationed in St. Louis. How could even Custer spend the better part of a day sampling the wares of the Cheyenne, admiring Cheyenne women, shooting Cheyenne horses–and never bother to at least send someone to check on his fellow soldiers?

Unknown to Benteen, the friend passes the letter to a St. Louis newspaper. The newspaper prints the letter. Two months later, Officers’ Call bugles across Camp Supply. Benteen arrives late to Custer’s tent and looks in to see Custer shouting at his officers, pacing back and forth, whacking his boot with a quirt. “No officer is to write letters to newspapers,” he yells (even though Custer himself writes letters and magazine articles all the time, describing his exploits.) “If I find out who did this, I will cowhide that man within an inch of his life.”

Benteen steps back from the tent’s entrance. In the dim lantern light that shines out, he draws his service revolver and checks the cylinder to make sure it’s loaded. Then he steps back in. “Colonel,” he says, a hard edge to his voice, “I guess I’m the man you want. I’m ready for the whipping promised.”

Custer’s mouth drops open and their eyes meet. Benteen’s eyes are the color–and hardness–of a dagger frozen in a block of ice. They stare at one another. Custer’s mouth works. Finally Custer says, “Benteen, I will see you again.” Then he throws the quirt onto his desk and shouts, “Dismissed.”

Benteen glares at Custer while the others edge past him and out of the tent. Finally, Benteen also turns on his heel and walks away.

Back east, newspapers proclaim Custer’s great victory over the Cheyenne. Accounts of the “Battle of the Washita” make his reputation as an “Indian fighter.” But in a dozen years of off-and-on warfare against the Native tribes of the sprawling western plains, this is the only victory George Armstrong Custer will ever win.

To understand Custer’s demise at the Little Bighorn, you have to understand what happened at the Washita eight years before.

This is an excerpt from my book, Monuments: an Atheist’s Reverent Journey.