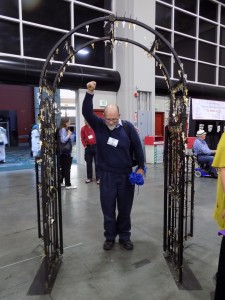 While I was away on my five-week “Great Western Pilgrimage,” my better half, Kate, entertained a longtime friend from the east coast. The friend appreciated that I was a minister, now retired. Upon hearing about my “Gentle Atheist” website, though, she was plainly taken aback. “How can a minister be an atheist?” She asked. “How can an atheist have a spiritual life?” She might yearn for a spiritual conversation with me, but “How can you have a spiritual conversation with an atheist?”

Kate’s friend plainly saw the terms, “spiritual life” and “atheist,” as contradictory. She may have a point. After all, plenty of atheists seem to agree with her.

Either way, she posed excellent questions. In my view, they lift up the importance of the “gentle” in “gentle atheism.”

To me, gentle and enlightened atheism asks that we engage different cultures and languages, both secular and religious, rather than letting natural human variation separate us from meaningful conversation.

To put it a different way, I’ve spoken with plenty of atheists who express disdain at such words as “spirit.” (Or faith. Or God. Or plenty of others: “hymn,” “sermon,” “sanctuary,” “salvation.” The list is long.) They don’t want to hear them. Wouldn’t think of using them. If Kate’s friend ever listened to, say, Bill Maher–or some Unitarian Universalist Humanists–denouncing “religion,” I can understand her reluctance.

It seems to me, though, that such rhetorical divisiveness is more about group dynamics than about either religion–or reason.

Whatever terminology we use, the richest part of our humanity is evoked by what we might call “deep experiences.” In the case of my “Great Western Pilgrimage,” these included the sublime beauty of a lunar eclipse over the Craters of the Moon volcanic fields. It included a broad expanse of interlocked fossils, still in place, excavated from a twelve-million-year-old volcanic ashfall, drifted from an immense caldera a thousand miles away.

It was deep and sometimes heartbreaking to witness the sites of Crazy Horse’s murder, the Wounded Knee massacre, the Cheyenne breakout, or Crow “hot dances.” It was deep to contemplate the shining beauty and sinister threat of Mount Rainier. Finally, engaging the cultural and spiritual richness of the Parliament of the World’s Religions, brought many deep experiences.

Of course I’ve found deep experiences closer to home, from looking out across southern Indiana’s golden autumn hillsides to the heart-melting smile of my two-year-old granddaughter.

There is nothing silly or superstitious about any of these moments. They outline my niche in the sublime nature of things. They express and engage my heart’s aspirations and apprehensions: the cosmic tendrils that enweb me, locate me within the universe, bind me to my fellow human beings.

To me, they are only enriched by calling them “spiritual.” To discuss them is the beginning of a “spiritual conversation.” And while I definitely find I can have that conversation with a thoughtful person of different belief, I cannot have it with someone who is disrespectful or thoughtless.

It seems to me the term, “spiritual,” is essential to deep and meaningful conversation with a fellow human being of more traditional belief than I. How can we communicate if my religious position consists primarily of words I refuse to use–or refuse to hear?

Any thoughtful person has probably experienced the risks–but also, hopefully, the rewards–of sincere religious conversation. As demonstrated at the Parliament of the World’s Religions: if the participants are willing to listen as well as talk, then inter-religious dialogue can be deeply rewarding and enriching.

Sadly, that doesn’t happen often. The more common attitude is to express little interest in the “other.” It’s not dialogue. Religious talk too often means someone wants their opinion heard and accepted–while reciprocation is avoided as a sign of weakness.

Again, that’s sad. Refusal to engage one another’s language is part of a more primal dysfunction: maintaining the tribe. Frankly, fundamentalist atheists are just as prone to such primal group dynamics as fundamentalist anyone else.

As an atheist, do I have a “spiritual” life? You bet I do. I am embedded in awe, inspiration, and gratitude. I acknowledge that my means of expressing this may still sound unfamiliar: a little “off” to a more traditionally religious person. But all traditions had their beginnings. Profundity does not have a minimum age requirement.

Sociologists will tell you, conversation shaped to maintain the group, can devolve frighteningly. In the emotional drive for acceptance and cohesion within the group, participants engage in ever more exclusionary rhetoric. It starts with “I believe (or people shouldn’t believe) X.” It goes downhill to “People who don’t (or do) believe X are stupid.” In the worst cases, it gets to “Those who don’t (or do) believe X deserve to be punished.” That’s the kind of talk that brings real violence to the world.

Deep and meaningful conversation requires a commitment to our mutual humanity. It requires us to respect our differences–and to struggle a bit to engage them. It requires moments of–well, just plain discomfort. Mutual commitment to such dialogue is, I suppose, not without its risks. But with it, a theist and an atheist might just have the most profound spiritual conversation of all.