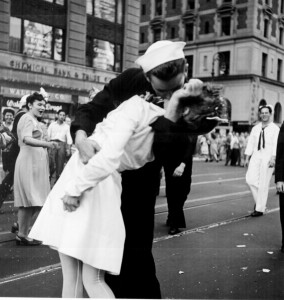 This photo appeared in the New York Times 70 years ago, taken by U.S. Navy photographer Victor Jorgenson. He titled it, “Kissing the War Goodbye.” A week later, Life Magazine published a shot taken by Alfred Eisenstaedt, from a better angle.

Life blew Eisenstaedt’s photo up to fill a full page. On the facing page was a collection of other couples kissing to celebrate “V-J Day:” Japan’s surrender ending the Second World War.

The other photos were real kisses: real celebrations of the War’s end. Though striking, Eisenstaedt’s shot was of something different.

Here’s what Eisenstaedt himself later wrote: “I was walking through the crowds in [Times Square on] V-J Day, looking for pictures. I noticed a sailor coming my way. He was grabbing every female he could find and kissing them all–young girls and old ladies alike. Then I noticed the nurse, standing in that enormous crowd. I focused on her and just as I’d hoped, the sailor came along, grabbed the nurse, and bent down to kiss her.”

But the sailor did more than that, didn’t he? He locked the woman into a vice-like grip which shows real expertise. He knew just how to grab an unwilling woman. He threw her off balance, her splayed knees show her helplessness. The angle of his head in the Eisenstaedt photo shows him, really, attacking her with his mouth. He’s not planting anything resembling a sweet–or even good natured–kiss. She is the shocked and passive receptacle of this man’s violence.

Look at her body language. Her twisted legs show how he has pulled her around. One hand hangs at her side in shock; the other is apparently clutching her purse: a big city woman’s automatic reflex, to protect her purse from being stolen.

There’s no tenderness in this kiss. No celebration on her part. It’s brutal.

Our reaction to this photograph as a culture–says more about us than about the photograph.

Couples have taken pictures of themselves in imitation of the pose. I’ve seen never one that quite gets it right, though. That’s because in the imitations, the woman is there willingly. They know the man they’re kissing. They’re kissing him back. They’re in control of hands and legs. It would take a highly trained actor to accurately mimic the original.

There’s a huge statue of this “kiss” in San Diego. It’s titled, “Unconditional Surrender.” The statue doesn’t render the Eisenstaedt photograph quite accurately, either. The element of force–the stronger person overcoming the unwilling weaker person–is not in any of the imitations.

The sculpture’s title says it all. “Unconditional Surrender.” Yeah, yeah, yeah, it’s supposedly about Japan’s “unconditional surrender” to end the War. But Japan is nowhere in the sculpture. The artist’s subconscious knew exactly what he–and the sailor–were up to, whether his conscious mind admits it or not.

This is the most beloved sexual assault in American history.

Rape culture doesn’t hide in the shadows. It proudly offers its violent, woman-degrading self to view. The photographer saw the assault coming–and thought only of the shot he might get. The crowd looks on, grinning and sniggering. We see (and we’re relieved it’s not happening to us) but we only smile and shake our heads.

A question: was this woman, ever before this moment, victim of a full-fledged rape? Statistically, it’s quite possible. What a brutal trauma to relive that pain! The photographer could position himself precisely because he watched the sailor doing this to a series of women. Some of those woman almost certainly were prior rape victims. No matter. The crowd grins and sniggers, the photographers snap their pictures. No one does a thing to help. If nightmares follow, they’re out of public view, alone in silent shadows.

That’s what rape culture looks like. A man like me can only try to imagine what it feels like. But as long as we smile at this image–that’s also who we are.