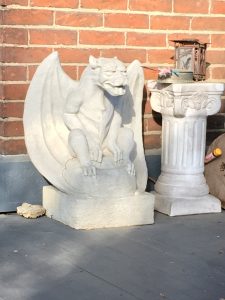 I was in the middle of a crush of students, changing classes at Salt Lake City’s West High School, in 1966. A girl was walking down the stairs ahead of me, wearing a loose-ish, pull-over top. Without even thinking about it, I hooked a finger at the neckline, pulled the fabric toward me, and peeked down her back. She turned to give me an “I don’t believe you did that” look, we reached the bottom of the stairs, and she walked away.

I snickered to a couple of friends about it at lunch. A few days later, one friend, John, told me, “Hey, I was walking down the hall and heard these two girls talking. One of them says, ‘I was just going down the stairs and this guy looks down the back of my blouse.’ The other one says, ‘Really? What did he look like?’ ‘Kind of stupid looking.'” John burst out laughing at my expense. Looking back, it seems like minimal retribution.

As honestly as I can recall, that was 50% of my career as an overt sexual abuser. Still, in the soul searching of 2017’s “Me, too” era and sexual abuse/harassment allegations in business and politics, it’s a tacky piece of a much larger picture. It’s a picture in which I have to admit, I’ve been part of the problem more than part of the solution.

Back in 1966, what I did was “Ew”-inducing, but unremarkable hijinks for a teen-age boy. It was something girls didn’t like that we’d hee-haw over when they weren’t around. In the bigger picture, physical harassment of adolescent females by adolescent males was ubiquitous. At some level, it was accepted by both sexes.

My other 50% came at the home of another friend, Ted, sitting around and joking with him and his sister, Mary. She was wearing jeans. At one point, he grabbed her by one ankle and I grabbed her by the other. “Make a wish,” we yelled, and started pulling her legs apart. We were all laughing. But if I’m being honest, I was getting a buzz out of it.

All good fun? I sure thought so. If I went to a public swimming pool or city park about any summer’s weekend, I’d see that sort of hazing as a commonplace. Usually accompanied by laughter. But looking back 50 years, that was the youthful face of rape culture. And I was an enthusiastic part of it.

There was certainly a continuum from, say, two guys grabbing a girl and tossing her into the pool at one end and a male outright groping a female toward the other. Where the precise point came between what wouldn’t raise an eyebrow and what would, I didn’t even try to sort out in the moment. I was more physically repressed than most young men, so I didn’t venture very far down that line with my actions.

But my mind went there all the time. More importantly, perhaps, if I saw some male going there for real, I was more likely to be amused than see it as a problem. Rape culture. I was doin’ it.

Looking back from the present, those memories are a stark reminder just how huge and enveloping patriarchy and rape culture are. After all, if it’s just “boys will be boys” good fun to toss a “girl” into the pool, how seriously will those same “boys” take that “girl’s” professional statements 20 years later in a court of law, for example, or in a political campaign.

If the child is father to the man, what kind of men were we creating? Or to put it differently, when I hooked my finger into the neckline of that girl’s blouse and took my peek–I don’t even remember what I saw there or even what she looked like. Penny-ante though the prank was, it totally objectified her. I was adding my little layer to the glass ceiling, it’s all of a piece, a bad attitude it took good women (and men) a generation to un-teach me.

The “battle of the sexes” is vast and multi-layered, even when you take a strictly binary look. At some point, I think it has to come down to seeing the eyes of the person in front of me and understanding that what lies behind those eyes is just as deep and dear as what lies behind mine. Which is, of course, a “blinding flash of the obvious.” But it’s also prone to get lost in the evolved, hormone-driven haze in which we humans move.

All of which is to admit, I have limited standing to pass judgment on someone like Al Franken. Given the raunch comedy and party atmosphere in which he made his career–not to mention the fact he was born only one year after I was–it shouldn’t be amazing that he didn’t learn to keep his hands to himself. He’s a performing extrovert, I’m a repressed introvert. There but for fortune go I.

On the one hand, it is vastly disappointing. Was it unreasonable to expect someone aspiring to one of the highest offices in the land, to leave adolescent behavior behind? On the other hand, at least in Indiana, where I live, “touching a person’s genitals, buttocks, or female breasts” without consent is sexual battery, a level 6 felony. That puts Franken’s glad-handing into the realm of criminal law, up to 30 months prison time and a $10,000 fine.

Which is still not equivalent to Alabama Senate candidate Roy Moore’s activities. More would be looking at a level 4 felony in Indiana, up to 12 years prison and the fine. Of course, the statute of limitations has run out on all both men’s current accusations. It’s also not lost on me that Moore has a good chance of being elected while Franken’s political career, having alienated a crucial part of his liberal base, is probably dead in the water.

There has to be a bottom line, but it’s a hazy trek trying to find it. Rape culture is not okay. Grabbing any part of a person without their consent is not okay. At the same time, not all grabbing is the same, the law has only a limited and fuzzy grasp on harassment and sexual abuse, and we’re basically left to sort out very complex, emotion-laden issues as best we can with very limited tools.

We might begin by being honest with ourselves. We’ll never put patriarchy or rape culture behind us unless we’re willing to look at them as an interconnected whole. And unless each of us is willing to look honestly at ourselves. In part, that means me owning the full spectrum of ways in which I’ve objectified, and thereby harmed, women, indirectly as well as directly. That’s a landscape too vast to fit into one blog post.

Guilt is not a useful emotion, though I believe regret is. As one female acquaintance puts it, “Now that you know better, do better.” That’s totally fair.

Being honest also means, it’s sexual abuse even when one of “our” guys does it. My default position has become, “Believe the women.” Al Franken is where he is, not because of conservative-women-out-to-get-him or conspiracies between Facebook and the Republican Party, but because of his own actions. And if Roy Moore’s actions are far more reprehensible than anything Franken likely did, Franken is still not blameless.

In the intersection between sex crime and politics, I note that voters under age 40 are polled as taking sexual abuse more seriously than voters my age. Perhaps that’s where hope lies. It’s time for a sea change: time to vote out the “good old boys” en masse, vote in younger blood that understands things my generation still doesn’t, and most of all, vote far more women into office.

It’s not that women never do wrong. It’s that patriarchy and rape culture being inextricably linked, we have to kill the one to kill the other. We will continue to have rape culture until men are no more than 50% of the business leaders and office holders in our society. And that won’t happen until we’re committed to really making it happen.