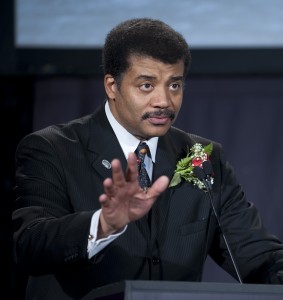 I love Neil deGrasse Tyson. I love his wit and enthusiasm, particularly because he usually combines them with impeccable logic and factual accuracy. I say “usually” because if you watch carefully, you can catch even Neil deGrasse Tyson in a blooper now and then.

Case in point is an otherwise excellent lecture he delivered in Las Vegas a few years ago. At one point, he quotes Albert Einstein.

“It was, of course, a lie what you read about my religious convictions. . . . I do not believe in a personal God,” Einstein wrote. He then added, “If something is in me which can be called religious, then it is the unbounded admiration for the structure of the world so far as our science can reveal it.”

Tyson then sums up the Einstein quote by saying, “So case closed. Anyone says Einstein was religious, just show ’em this letter.”

But Tyson misses Einstein’s point. Einstein had actually explained how he was religious. The caveat was, his religious sentiments did not include belief in God.

Or at least, traditional notions of God. In a famous telegram to a New York Jewish leader (who had pointedly and publicly put the “God” question to him,) Einstein responded, “I believe in Spinoza’s God, who reveals himself in the lawful harmony of all that exists, but not in a God who concerns himself with the fate and the doings of mankind.”

Or as he put it more poetically a few years later: “The pursuit of science leads to a religious feeling of a special sort, which is indeed quite different from the religiosity of someone more naive.”

So Einstein did not believe in traditional notions of God. But he used the “G” word all the time. His God was a matter of metaphor, not supernatural belief. At the same time, though, in thoughtful moments Einstein did not hesitate to call himself a “religious” person. He was comfortable with religious language, even noting in 1941, “There are people who say there is no God. But what makes me really angry is that they quote me in support of such views.”

My point is not to argue the existence of God. Like Neil deGrasse Tyson (or more like Albert Einstein,) I’m fine with God-talk as metaphor, but consider myself an atheist beyond that. My point is to call out the common mistake of assuming an atheist can’t be religious. I think Einstein would disagree with that–and being a Minister, I certainly disagree with it. Moreover–again–that’s not what Einstein even said in the quote Tyson cited.

To be fair to Tyson, it was a small point in a long lecture. If called out on it, I suspect Tyson himself would concede he did not say what he was trying to say. Given a moment to think about it, I doubt he’d fret much about whether an “atheist” can be “religious.”

Still, it’s a common mistake. I also suspect–though it would take a lot of research to prove–that it’s a mistake particularly endemic to Christian culture, especially in the United States. That is, that American atheists, particularly, buy into the fundamentalist notion that an atheist cannot be religious. As a German Jew, Einstein had no problem with religious language or feeling. I’ve talked to other Jewish physicists who are comfortable in the same way. And of course, belief in God is irrelevant to, say, a Buddhist, whether the person is a physicist or not.

I’ve said before and I’ll say again, belief in God is not what makes me a religious person. I love the sciences. I love deep personal experience. I love poetry, questions, and human connection. I feel compassion–at least in my better moments. I want to be a better person. To go back to Tyson’s Einstein quote, it’s not about belief in God. It is about–in Einstein’s words–“unbounded admiration” and appreciation, and living by that deeper view.

As with any false dichotomy on the scale of the science/religion debate, I grieve that the two extremes spend so little time listening to each other–and so much time talking among themselves about each other. If there’s ever going to be a “Kingdom of God” (to use a religious term,) it will be a time when we cast instinctive “us versus them” group dynamics aside and deal with our mutual humanity, simultaneously flawed and gifted as it is.