The facts about Custer's (so-called) last stand didn't matter. What we (Euro Americans) wanted, was comfortable myth. Custer's widow and his first biographer provided us with that myth. 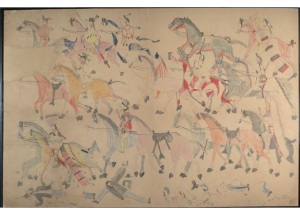 140 years ago today (June 27, 1876,) a column of soldiers discovered the bodies of George Armstrong Custer and 210 of his soldiers on a desolate ridge in Montana, above the Little Bighorn River. Dug in atop a ridge four miles southeast, were Major Marcus Reno, Captain Frederick Benteen, and the 400 surviving members of the 7th Cavalry. This and the previous post are excerpts from my upcoming book, “Monuments: an Atheist’s Reverent Journey.”

No one even considered holding an inquest when the awful news of Custer’s destruction arrived. Custer’s gift for publicity was at least as great as his military skill, thus, the public considered him the invincible “Indian fighter.” But from the President on down, the Army knew him for what he was: courageous and aggressive, yes, but also egotistical, unpredictable, sometimes downright erratic. Talking to the New York Herald, President Grant summed it up best: “I regard Custer’s Massacre was a sacrifice of troops, brought on by Custer himself, that was wholly unnecessary–wholly unnecessary.”

But Custer’s superiors did not reckon on Custer’s wife, Elizabeth, better known as Libbie. Being the General’s wife was her life’s calling, and she was not about to let that life’s work be smashed. She had will and a gift for strategy: had she been the General and Custer the helpmate, Crazy Horse and Sitting Bull would have had more to worry about than they ever did with Custer.

So she set out on a campaign to mythify her husband. She wrote books about their life together, full of romance and drama, portraying Custer as a hero. One of the many followers she attracted was a dime novelist named Frederick Whittaker. He used her notes and stories to write a hot-selling potboiler, the first Custer biography. He likened the General to King Arthur and Robin Hood rolled together, and insisted Custer’s demise could only have come through cowardice and betrayal among his subordinates.

Whittaker’s main scapegoat was Major Marcus Reno, Custer’s second in command. Not satisfied with the charges in his fanciful book, Whittaker wrote his Congressman to officially accuse Reno of cowardice, drunkenness, and dereliction of duty. To save his reputation, Reno asked the Army to hold a Court of Inquiry.

So picture yourself at the Palmer House Hotel, Chicago, in the freezing winter of 1879. Cast-iron radiators wheeze along the walls of the grand ballroom, which teems with military men in mature deliberation. It’s more than two years after the battle as, one by one, officers, enlisted men, and civilian mule drivers take the witness chair.

Under questioning by the “Recorder,” the 19th-century version of a Judge Advocate General, they tell variations on the same story. The 7th Cavalry was exhausted the morning of the battle. They had ridden all night, following a massive trail of “Sioux” and Northern Cheyenne. From a hilltop that morning, June 25, 1876, six Crow scouts spotted an immense camp in the distance. They called General Custer to come up and look–but he could make out nothing in the haze. He scoffed and told the Crow they were mistaken.

The transcript of Reno’s Court of Inquiry is on the internet. If you study the battle much before reading it, it becomes as interesting for what no one mentions, as for what they do. In this case, details do not come out because no Natives are asked to testify. The Court doesn’t get to hear how worried the Crow were about the size of the camp, or how offended they were that Custer pooh-poohed them. The lead Crow scout, Half-Yellow-Face, assured Custer in sign language that if they mess with that huge camp, “You and I will both go home tonight by a road we do not know.” Nor does anyone mention–though the Crow scout White-Man-Runs-Him would insist till his dying day–that Custer was steadily sipping whiskey out of “a little yellow bottle.”

In other testimony–witnesses who voiced strong opinions about Reno outside the courtroom, are much more subdued under examination. Only two of the civilians are willing to accuse Reno of drunkenness on the record. Commissary records do show that whiskey consumption in the 7th Cavalry was high. It was a culture of hard drinkers, Reno particularly so. Little is said about that, either.

Something else they don’t talk about, is a lack of training that would be criminal in our day. A third of the 7th Cavalry were raw recruits, many of them foreign-born. These kids had never fired a military rifle and could barely ride a military horse.

Also crucial, hidden in every word of testimony, is enmity among the senior officers. The Battle of the Washita hangs like an invisible miasma. There’s real hatred between Custer and Captain Benteen, and other relationships are little better.

Custer had a tight inner circle among the officers: his brothers and brother-in-law, as well as his adjutant, Lieutenant Cooke. (Benteen always referred to Cooke as “the Queen’s Own.”) Those on the outside, Reno and Benteen among them, always referred to this elite as “The Custer Clan.”

Following the trail of moving Natives, they’d been passing huge abandoned campsites for days. By the morning of the 25th, they were plainly catching up. The trail was fresh, and they saw some mounted warriors in the distance.

In the middle of the morning, Custer detached Benteen with 125 men to search a line of bluffs far to the south. One wonders what was up with that. As Benteen later testifies, they’d been following the trail–that’s where the “Indians” were. But he has his orders.

Miles later, as they descend into the Little Bighorn River Valley itself, Custer detached Reno with 125 men to attack the camp from the east. Custer has no new information, he still hasn’t seen the camp itself. Has he changed his mind since he sent Benteen far to the south. Or did he send the hated Benteen off to keep him from any glory Custer hopes to win in the coming fight?

Meanwhile the mule train which packs the Regiment’s supplies, has fallen far behind. Custer’s force, less than 700 men to begin with, is now divided into four sections, none of whom know where any of the others are, nor exactly what’s expected of them. With the final five companies, 210 men, Custer circles to the northwest. Does he plan to attack the far end of the camp? Again, he has not hinted to anyone outside the Custer Clan what his plans are.

This is yet another thread, well-known to students of the Battle, but missing from the testimony. Custer expects absolute obedience at all times. But he never shares his thinking with his senior officers, only with the officers in his inner circle.

Reno attacks in the belief Custer will support him with the rest of the Regiment. Yet by the time Reno’s charge reaches the camp, Custer is nowhere to be seen. A thousand warriors counter-attack, Reno has no idea where the General is or what he intends to do, so Reno understandably cuts his losses. Outnumbered and outgunned, he retreats with heavy losses, to a hilltop a mile away. That’s where Benteen’s battalion and the pack train find them later in the day. The survivors spend the next two days there, cowering beneath a hail of Native bullets and arrows.

The Court of Inquiry grinds on, the weeks pile up. Each day, newspapers breathlessly print every word. Furious that Reno is not being suitably pilloried, Whittaker sends the Court a list of questions, and even asks to take part in the prosecution himself. The Court accepts the questions, but politely declines his offer to help. Outraged, Whittaker condemns the Inquiry as a “methodical whitewash,” and goes home. Twenty years later, he ends his life by shooting himself in the stairwell of his New York House.

So–on the day we’re picturing, the key witness is Captain Benteen himself. Benteen cuts an impressive figure in old photographs–for his eyes mostly. He has the look of a man who does not suffer fools easily, and who will not long ponder before assigning a person to that category. He detested Custer, and made no bones about it. For that matter he seems to have barely tolerated Reno.

Benteen’s testimony drips with acid one-liners. He refers to Custer’s orders to explore far off the trail, as “valley hunting ad infinitum:” “Rather a senseless order,” as he later terms it. When he turns back to find Reno’s men besieged by Native warriors, he offers that “they all thought there was a happier place than that, I guess.” As to the possibility that Reno was drinking, he notes much later, “If I had known he had any [whiskey] on him, I’d have been after some myself.” He gives Reno his due, though perhaps with faint praise. Asked of Reno’s performance, he replies, “I think it was all right.”

Most remarkable is his answer when questioned about Custer’s possible whereabouts. “It was the belief of the officers on the hill that General Custer [was watering his horses in the Yellowstone River] and we were abandoned to our fate.” In other words, the besieged men believed Custer had left them to be killed, just as he had pulled out and left Major Elliot to be killed at the Washita. Reading the transcript, one senses Elliot’s death dripping from every page of Benteen’s testimony.

Reno has no better opinion of Custer when he takes the stand. Directly asked about his relationship with the General, Reno tries to dodge the question. The Recorder repeats himself and again Reno sidesteps. Finally the Recorder insists and Reno replies, “Well, sir; I had known General Custer a long time, and I had no confidence in his ability as a soldier. I had known him all through the war.”

Well–what can one say? On the trail of at least 10,000 Natives–2,000 or more of them seasoned, well-armed warriors–Custer split his men into four groups, none of whom knew where the others were. If Custer had a strategy, no surviving officer could tell the Court what it was. Custer, Reno, Benteen–each disliked the others. Paranoia about one another’s intentions ruled the day. Custer and his men died as much from that as from Native arrows and bullets.

In the end, like Benteen, the Court of Inquiry damns Reno with faint praise. His actions do not merit censure, they say. They clear him of all charges.

None of this mattered. The public wanted myths, not facts. The Court’s fact-finding could not stand in the face of Libbie Custer’s brilliant campaign to turn her husband into a myth. Reno eventually died in poverty, alone and despised. Custer became a legend. His reputation held firm until the cultural re-examinations of the 1960’s.