You are here: Home / When Technology Outruns Reason, Pt. 5 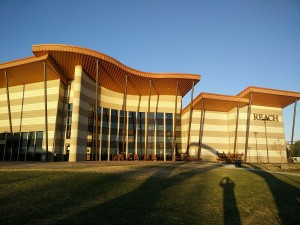 The morning after I viewed Hanford’s B-Reactor, the breeder reactor which produced the plutonium for the first generation of atomic bombs, I checked out the Hanford Reach Interpretive Center. Also called The Reach, that was a brand new museum dedicated to Hanford Reach National Monument and the Columbia River. It was a crisp, prairie-colored building that overlooked the flowing waters. Wild grasses swayed in plantings and the asphalt of the parking lot was black and new. I was the first person there that morning.

I was greeted by a tall, white-haired man, slightly stooped. He wore a broad smile and his name tag read “Volunteer.” He eagerly pressed information brochures into my hand, then stepped out from behind the counter to show me around. “Hell of a nice guy,” I thought to myself, and couldn’t resist smiling back.

He was proud of their new museum, and I couldn’t blame him. Soft light bathed brand new galleries, displays that were both interactive and ingenuous. He showed me lava floes in action and prehistoric fang and claw. Where I lost myself, though, was the Manhattan Project Gallery.

Only later would come the international paranoia, duck-and-cover drills, radioactive mutation stories, and generic pessimism of a new and troubled age. Them, Godzilla, Atomic Age Vampire, On the Beach, Planet of the Apes, tapering into Mad Max, curling into Blade Runner, spreading through The Hunger Games. B-Reactor was the wedge end of a whole new, dystopian culture.

One display consisted of raw statistics scribed onto 1940’s-era 78 RPM phonograph records against a huge photo of two people jitterbugging to a jukebox. Thousands of transplanted families lived in thousands of hastily gathered mobile homes. “The world’s largest trailer park,” the display called it. 16,000 packages of cigarettes sold each day. 700 cases of Coca-cola gulped down. Each week they ate 135 tons of meat. Fewer than one per cent of them even knew the end product toward which they were working. It was just an exciting project that would somehow win the War.

The exhibit framed the story in terms of saving lives. Invading Japan would bring a million Allied casualties, it read. A mere two destroyed cities, particularly their cities, was a nice alternative. A generation accepted that reasoning, at least on our side of the Pacific. Slowly though, even in the United States, debate began. It has gone on ever since. Was it really necessary to drop–not one, but two–atomic bombs in the summer of 1945?

I don’t see that argument being resolved in my lifetime, but I have come to doubt that’s even the point. Hardly anything about nuclear power turned out the way anyone expected, even those most “in the know.” just one more time we reached into the abyss with no idea of what we would actually draw out.

Looking at the displays, though, these were families of nice people. They were nice people in the same way my guide was a nice person: friendly, enthusiastic, proud of what they were doing. No one saw a shadow side. They drew good pay, pursued their dreams, and were called “good” by the rest of wartime society. Now we’ll spend my children’s generation and the next cleaning up the damage. If we can clean it up.

Damn, we’re ingenious. We build metaphorical roads up mountains without knowing what lies on the other side. Sometimes the road slides off the mountainside completely, collapsing in rubble and broken dreams. We resume, re-gather, rebuild. Good thing we’ve been so resilient over the ages. I think.

By the time I had wandered through all the exhibits, more people had arrived and the nice volunteer had gone back to his counter. I made it a point to go back and shake his hand before I left. Because–isn’t that what you do with nice people? And the world goes on in unending rotation.