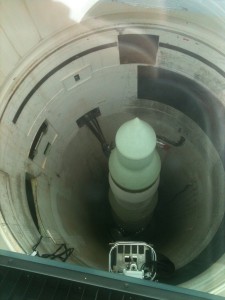 NOTE: This essay is an excerpt from my book, “Monuments: One Atheist’s Journey through Land, People, and Time.” This part takes a religious look at our nuclear missile defense system.

“We,” by which I mean the society in which I am imbedded, thought we were doing a great thing when Enrico Fermi and his colleagues devised that first nuclear reaction at the University of Chicago. I’ve walked past that site. What was once a laboratory housed beneath the squash court, is now a modernistic memorial of striking design. By the time the artist conceived it, plainly, the story had evolved in ways Fermi and his scientists could hardly have imagined.

I’ve also visited the museum at Los Alamos, New Mexico, where hundreds of physicists worked together to create the first atomic warheads. Like Fermi’s team, those scientists also thought they were doing great things, defending the free world from tyranny. Once we dropped two bombs on Japan, though, second thoughts started sprouting like mushrooms on a rotten log.

Now cars and huge tractor trailer rigs screamed past me as I drove toward another memorial of like nature. On South Dakota’s I-90 freeway, no one seemed to notice the low, fenced compounds here and there along the right-of-way. I wouldn’t either, except one of them was on the brochure laid on the seat next to me. Where the little map showed an arrow, I pulled off and followed the spur to a nondescript quadrangle, eight-foot chainlink fence around a single story, cream-yellow building.

Another car pulled into the little parking lot, then another. All tourists like me. A sign on the locked gate in front of us read, “Delta 01 Launch Control Facility. Restricted area.” A military looking, green armored car sat inside the fence. Beyond that, another sign warned people to keep away from a knee-high concrete cone. It was, the sign said, a high frequency radio antenna hardened to withstand an atomic bomb blast.

I reflected back on Fermi and those physicists at Los Alamos. I reflected on how innovation can force more innovation until it stops being fun.

Meanwhile, I could hear the freeway traffic a quarter mile away. In the distance a combine worked its way slowly across a field, harvesting and thrashing the golden wheat. All around us stretched the middle of middle America.

We tourists stood around and joked about the armored car, the blast-proof electronic circuitry, and that low building in front of us with the most blah-looking aluminum siding you ever saw. It would have been boringly nondescript if not for the searchlights, radio antennae, cameras, and motion detectors all over it.

A National Park Service truck pulled in and a young man got out. He wore the Park Service uniform and inevitable Smoky Bear hat. We shook hands all around, then he unlocked the gate. “Welcome to the Minuteman Missile National Historic Site,” he said. “You are about to enter a war zone.”

This was one of two memorials to the so-called “cold war” between the United States and the Soviet Union. The other, the Ronald Reagan Minuteman Missile Historic Site, was one state away in North Dakota. A generation ago this weaponry covered thousands of square miles of America’s heartland. Some of it is still active.

You can, I’ve found out for myself, put in hundreds of hours pouring over online articles and old training videos about the nuclear arms race. It sucked up the cream of United States and Soviet Union innovation for 40 years. The name of the game (they said) was not to conquer, but to withstand “nuclear aggression” by the foe, then to deliver a crushing response. We raced to build new and bigger nuclear warheads, better ways of protecting them, and more efficient ways of delivering them. So as to kill lots of bad guys. The bad guys were “them,” not “us.”

Really, it was a study in paranoia and this stretch of prairie was ground zero. In five years, 1958 to 1963, the United States designed and installed 1,000 hardened, steel-and-concrete underground missile silos beneath the plains. We built indestructible (we hoped) underground command centers and security systems. A hundred nondescript, one-story buildings, 100 chainlink compounds, 100 armored cars for security patrol, thousands of miles of underground wiring to launch all those missiles on five minutes’ notice. Each missile in each silo was the most compact, deadly engine of war human ingenuity could devise at the time.

For the record, all that comprised just a third of our overall “deterrent.” Submarines off our coasts also bristled with “nukes,” and sprawling air bases could launch squadrons of jet bombers. This was our nuclear “triad.” Meanwhile the Soviet Union was also doing the same thing. Other nations also joined in.

We coined the term, “overkill,” to express each nation’s capacity to destroy the other several times over. The famous theory was that we were assured peace because, if either nation started a war, both were sure to be destroyed. “Mutual Assured Destruction” it was called, appropriately shortened to M.A.D.

The craziest thing about M.A.D. is that for more than a generation it seems to have worked. So far, anyway.

We eventually reined in the nuclear arms race, not from reason but due to expense. Those damned warheads and missiles could bankrupt a nation even in peacetime. So over the last generation the United States and Russia reduced our total warheads by, give-or-take, about half. Of course we still have more than enough to blow one another to smithereens. Meanwhile, ever smaller powers continue to try to join the club.

So there I was, waiting for the National Park Service tour through this control center. Except for the two memorials, all other cut-back sites were destroyed as part of Strategic Arms Reduction Treaties. The land was sold back to the farmers from whom the military had procured it before the whole, paranoid business began.

The Park Ranger led us around this site, exuberantly describing the Minuteman Missile program and its capabilities. Such a quiet place now. This single control center was once able, on five minutes’ notice, to wipe ten different cities off the face of the earth!

He unlocked the building and we followed him in. We peeked through doorways at sleeping quarters, an entertainment center, all the amenities for the soldiers who guarded this complex and its ten missile silos. They did regular patrols in the green armored car. Between patrols, if a motion sensor picked up movement at a silo site, armed guards would scramble to investigate. If you happened to be wandering around the chainlink perimeter at a silo, you’d be in big trouble. So, he told us with a smile, would be a jackrabbit that was just trying to dig its way under the fence.

Off the hallway, he keyed a code into an electronically locked door. The latch clicked and he swung it open to let us into a cramped elevator. (The tour size was limited to the number of people who could squeeze into the elevator.) Down we rode, four stories into the earth to a concrete corridor. A hand-painted mural on the concrete showed a Minuteman missile tearing through a Soviet flag. Another mural was painted on the four-foot-thick steel door into the launch control center itself. It depicted a pizza box. Above, in stenciled letters: “WORLD-WIDE DELIVERY IN 30 MINUTES OR LESS.” And below: “OR YOUR NEXT ONE IS FREE.”

We stepped through the steel door into a Tylenol-shaped vault filled with ’60’s-era electronic equipment, indicator lights, and rocker switches. The guide explained that even as missiles and equipment were upgraded over the decades they kept the old, hand-soldered circuitry. It was more robust than newer, printed circuits, better able to withstand the vibration of a nearby nuclear blast.

There were two identical control panels. Two “missileers” at a time would rotate through watches in this cramped space, 24 hours on, 24 hours off. A sequence of top secret pass codes admitted them to the elevator, unlocked the steel door to the vault, and also opened the red vault that held the missile launch keys. Which looked like any padlock keys. The launch switches were spaced 12 feet apart, so that both operators had to turn their switches at the same time for a launch to take place.

“One push of the button and a shot the world wide,” folksinger Bob Dylan piped at the height of the cold war. “And you don’t ask questions with God on your side.” One presumes this would be the same God worshipped by Colonel Forsyth, who commanded our troops at Wounded Knee, or Captain Medina, who commanded Charlie Company at My Lai.

In this missile control center, no, there would be no questions. “You were just trained to do it,” a former missileer later said on one online video I watched. “We worked under the assumption that if we got orders, the Soviet missiles were already on their way.”

Immense though that responsibility was, these two missileers were just minions, junior officers near the bottom of the military totem pole. Their orders and protocols filtered down through a complex bureaucracy all the way down from the White House. Failsafe on top of failsafe. At least that’s how the system was designed to work.

I don’t know what could possibly go wrong. First generation computers, thousands of miles of underground wiring, thousands of warheads, thousands of human being keeping it all maintained and under control. We’re still here. I guess it worked well enough.

Then again I reflect that anyone who reads this, now knows more about our nuclear defense than Donald Trump did when he was campaigning for President.